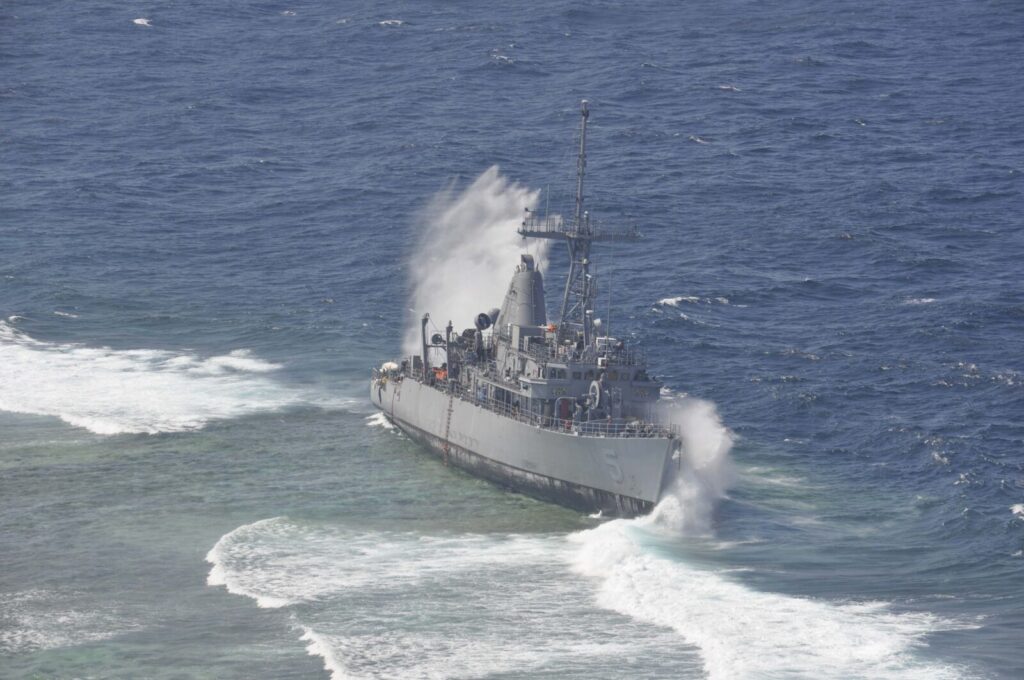 On 17 January, 2013, the USS Guardian (MCM 5) ran aground on Tubbataha Reef in the Philippines. The ship had gotten underway after a port call at Subic Bay. An investigation by US Naval authorities came to the conclusion that it was not practical to salvage the ship and that it would have to be cut up into sections and scrapped. This article provides additional background information concerning the ship and additional insight as to why this decision was necessary.

USS Guardian (MCM 5) is one of 14 Avenger Class Mine Countermeasures ships that entered service between 1987 and 1994. At the time they were authorized, these were the first large ocean going minesweepers to be built for the navy in 25 years. Due to problems experienced during the Korean War with steel hulled World War II era minesweepers, the navy undertook a major shipbuilding program during which 58 ocean minesweepers (MSO) entered USN service between 1953 and 1958. In addition 27 more of these ships were provided to foreign navies. The Avenger Class MCM design shared many common design features with the earlier MSOs including wooden hulls and non-magnetic diesel engines.

Guardian itself was built by Peterson Builders at Sturgeon Bay, Wisconsin and it was commissioned on 16 December 1989. It is home ported in Sasebo, Japan. The ships have the following major characteristics:

The basic hull design is similar to that of the previous MSO classes built in the 1950s. The hulls are constructed of fiberglass sheathed wood in order to minimize their susceptibility to magnetic mines. This was probably the major factor in the determination as to whether or not Guardian could be salvaged.

The reliability of non magnetic diesel engines has been a continuing problem for the Navy over the years. One problem has been finding an engine manufacturer who is willing to establish a production line for these engines because of the limited number of orders associated with a shipbuilding program. The majority of the 1950s built MSOs were originally fitted with Packard Model 1D1700 diesel engines. Due to problems experienced with these engines a major re-powering program was implemented during the 1960s and 1970s to replace them with Waukesha Model L-1616 engines. Originally it was planned to power the Avenger Class ships with Italian made Isotta-Fraschini (IF) Model 1D 36 engines. However due to production delays and problems encountered with these engines it was found necessary to fit MCM 1 and MCM 2 with surplus Waukesha engines left over from the previous MSO re-powering program. In order to utilize these engines it was found necessary to send them back to the vendor in order to obtain correct shaft rotation. This caused delays in the program. It is understood that reliability problems have continued to be experienced with the IF engines in service.

Basic minesweeper design features are driven by the ability to sweep three different types of mines:

Magnetic and acoustic mines are provided with “Ship Counts” which require a number of ship passes overhead in order to detonate. For this reason, it is necessary for the MCM to make multiple passes over a mine field in order to ensure that all mines are detonated.

Mine countermeasures ships are also provided with variable depth sonar (VDS) to assist in locating mines. A more recent development is the use of underwater submersibles referred to as Mine Neutralization Vehicles (MNV). The mine neutralization vehicle is a self-propelled remote-controlled submarine. The vehicle’s low acoustic and magnetic signature makes it virtually invisible to even the most modern sea mines. The Mine Neutralization Vehicle is the primary subsystem of the Navy’s AN/SLQ 48 Mine Neutralization System (MNS). Each sensor package consists of a mine-hunting sonar and two television cameras. In addition to the vehicle, MNS consists of an Umbilical Cable Handling System (UCHS), Vehicle Handling System (VHS), shipboard power supply, and associated control consoles. The system works in conjunction with a shipboard mine hunting sonar and precise inertial navigation system. The MNVs carry explosive devices which are capable of detonating bottom mounted mines and they also can cut the cables of moored mines. The MCM 1 Class ships are each fitted with a pair of MNVs. They are also capable of conducting the conventional mine sweeping operations previously discussed.

Prior to 1991 the Atlantic force minesweepers were home ported in Charleston, South Carolina while the West Coast ships were in Long Beach, California. In 1991 the decision was made to move the entire minesweeping force to Ingleside, Texas. At one time the majority of the MCM 1 Class ships were based there. Because of the limited range of the ships, this did not prove to be a satisfactory arrangement. In a number of cases it was necessary to transport the ships to their operating areas by means of heavy lift cargo ships. The Naval Vessel Register now shows the following home port assignments for the MCM 1 Class Ships:

The wooden hulled minesweeping program was originally inspired by the back to back losses of the steel hulled USS Pirate (AM 275) and USS Pledge (AM 277) both of which were sunk by mines off Wonsan, North Korea in 1950. Guardian represents the fifth loss of a wooden hulled ocean going minesweeper since that time. The others were:

At least five other ships of the class suffered significant damage from engine room fires but it was possible to restore them to service.

Helicopters have been used for some minesweeping operations. The MH 53E Sea Dragon helicopter can be used to tow a sled containing the actual minesweeping equipment. However there are limitations due to endurance and the requirement for a “mother ship” to actually stream and recover the equipment.

The future of the US Navy mine warfare program is uncertain. It is understood that the intent is to provide mission packages which can be used by the littoral combatant ships for mine countermeasures operations. However at this time no new vessels specifically devoted to mine warfare have been authorized.

George W. Stewart is a retired US Navy Captain. He is a 1956 graduate of the Massachusetts Maritime Academy. During his 30 year naval career he held two ship commands and served a total of 8 years on naval material inspection boards, during which he conducted trials and inspections aboard over 200 naval vessels. Since his retirement from active naval service in 1986 he has been employed in the ship design industry where he has specialized in the development of concept designs of  propulsion & powering systems, some of which have entered active service. He currently holds the title of Chief Marine Engineer at Marine Design Dynamics. He served as Executive Officer of USS Force (MSO 445) between 1959 and 1960.