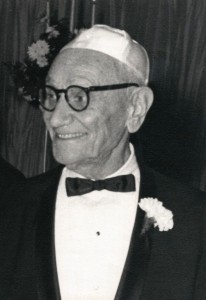 (Editor’s note: This is the third in a series of blogs by Norman Polmar, author, analyst, and consultant specializing in the naval, aviation, and intelligence fields. Follow the full series here.)

As a young kid, my parents usually dropped me off at Louis and Jenny’s home in northwest Washington for the weekends.  It was great: Jenny was a wonderful cook and “Louie”—as all the grandkids called him—was a great man, well read (although he grew up poor in the Russian countryside), and loving. We kids adored him; later I would dedicate my first book to him, Atomic Submarines (1963).

On occasion, Louie would take me downtown to see a jungle film on Ninth Street. When I finally noticed the second-hand book stores, I insisted that we visit them. My interest was the 25c paperbacks… available for a dime. I was looking for paperbacks about “girls,” being a typical pre-teen.

One day I noticed a magazine with a ship painting on the cover lying on a table of old journals. There were several issues of the U.S. Naval Institute Proceedings. One—without a cover painting—caught my eye for some reason. It was the August 1943 issue of the Naval Institute Proceedings. It cost a dime. I purchased it. (Did I also buy a Mickey Spillane paperback that same day? I cannot recall.)

I took the Proceedings home and devoured it, especially the article by Lieutenant William P. Mack about destroyers in action—“The Battle of the Java Sea.” I was hooked! I saved up the three dollars from my measly allowance and joined the Naval Institute as an associate member at age 15.

Mack, of course, went on to become a vice admiral and a distinguished novelist, writing several books about fictional destroyer actions. When he was Chief of Navy Information, in 1965, he presented me with my Naval Reserve commission… but that’s another story.

Thus, indirectly, Louie Wolf launched my relationship with the Naval Institute and my writing career. During the next couple years I read the Proceedings with great care. It became a secular bible for me.

About the same time as I found the Proceedings, I discovered Jane’s Fighting Ships, then the true bible of the world’s navies. After looking through several editions, I felt that it was wrong that a British book would be the guide for the U.S. Navy (as well as all others). I felt that there was at least a need for a similar book about the U.S. Navy.  Knowing that the Naval Institute also published books, I wrote a letter to the head of the organization proposing a book describing the U.S. Fleet.

The response was that the Naval Institute did not feel there was a suitable market for the book that I proposed, but the staff would like to speak with me about other book ideas. Great. I was 15 and didn’t drive. So, Louie Wolf drove me to Annapolis. (We suffered a flat tire along the way.)

(Years later, after a decade as editor and compiler of the U.S. sections of Jane’s Fighting Ships, the Naval Institute engaged me to become editor/author of Ships and Aircraft of the U.S. Fleet. Finally, I produced the hardback book about the U.S. Fleet that I had visualized at age 15! I have now produced nine editions of that work, which the late Jim Fahey, a friend, had begun in 1939 as a 48-page paperback.)

Meanwhile, in my early teen years Louie and I discussed naval matters based on what I had read. And, besides museums, he took me to the Washington Navy Yard whenever interesting ships were visiting. Among those we went aboard were the German submarine U-505, captured at sea in 1944 by then-Captain Dan Gallery, and the German yacht Grille. (After being captured the U-505 was towed to Bermuda and “hidden” there until the war was over; she is now in the Chicago Museum of  Science and Technology.)

And, every month I devoured the Proceedings. When I was 18, I read that the Navy was going to decommission the last two active battleships, the Iowa and Wisconsin. It would be the first time since the Indiana—battleship No. 1—was commissioned in 1895 that there would be no U.S. battleships in active service.

I wrote a short article proposing that the mothballed dreadnoughts—including two unfinished ships—could be rebuilt as missile and command ships. The article was accepted (!) and published in the December 1957 issue of the Proceedings. Shortly thereafter I received a check for $31. That was a princely sum at the time; the first money I had received for writing. It launched my writing career.

It all began with Louie Wolf and the second-hand book stores on Ninth Street.