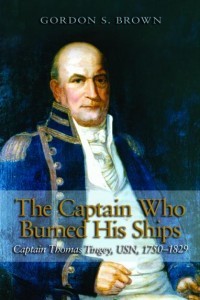 Thomas Tingey was not a giant among the officers of the early American Navy, but his career as a midshipman in the Royal Navy sailing to Newfoundland and the Caribbean with few prospects of promotion, as a merchantman during and after the Revolution and American naval officer provides a useful framework to measure the struggles inside the administrations of the new republic with its Navy and what role it should play.

Gordon Brown, a career foreign service author, has done that skillfully in this slim biography from the Naval Institute Press. Tingey, who was born in Great Britain, spent most of the Revolution as a merchantman carrying on trade in the Caribbean and at least once to Scandinavia in St. Croix, then a Danish colony.

From 1772 on, Tingey had at various times and for short periods lived in Philadelphia, indeed he was one of the first mariners from that city to enter the India trade following the winning of independence. After two decades of being a merchantman, he took the profits from his last trip to Madras and bought a 330-acre estate near Princeton, N.J., for his growing family. He was leaving the capital city at a time when tensions were rising between the United States and France, at the moment and constantly smoldering with Great Britain. The quiet life would elude him.

The mid-1790s also was the time when President John Adams wrung from Congress its approval of a Department of the Navy and the laying down of six frigates (eventually) and a number of smaller ships. The new department was also buying large vessels such as the one Tingey had captained on his last voyage and converting them into warships. All these moves by the Federalist administration were being made to protect the Atlantic Coast and American trading in the West Indies from the now-belligerent French and the constantly menacing pirates.

Navy Secretary Benjamin Stoddert knew he needed men like Tingey to serve as commanders in the Navy. Tingey also likely worked his own connections in the Navy and in the maritime community of Philadelphia to win his commission. Soon enough, he was again at sea – this time as an American naval officer. The country life proved only an interlude.

By 1800, Tingey was in the new capital on the banks of the Potomac supposedly assigned to oversee the construction of a 74-gun ship of the line that he was to command; but with a Navy Yard more of an idea than a reality, he was also helping speed its building.

And it was as commandant of the Navy Yard that Tingey made his greatest contributions to the  Navy.

The first was how Tingey, a Federalist, worked surprisingly well with the Democratic-Republican administrations of Thomas Jefferson and James Monroe especially. These economy-minded administrations turned away from building large ships of the line as too costly to construct, equip and man and embraced gun-boats for coastal defense and protecting American merchantmen in Mediterranean. It was during the eight-year Jefferson administration’s middle years that the Washington Navy Yard became truly organized under Tingey and his able superintendent John Cassin. Under Madison, he labored to prepare the yard for the conflict that the “War Hawks” wanted. He also had to re-establish the Washington Navy Yard after its destruction in the wake of the British invasion of the Chesapeake.

The second point handled well was how Tingey, who has written on early Washington’s political and social life, mixed his duties with providing opportunities for his in-laws, family and friends to benefit from his position and how he moved deftly in elite Washington circles socially, politically and economically – particularly real estate. As Brown wrote following an early dust-up over “the liberality of family contracts” that even when charges were not proven or Congress refused to investigate, there was a pattern of providing “official opportunities for profit to his family and friends.” The senior captain also “probably was capable of pressuring his employees to see things his way” in examining contracts for supplying the yard with materials. The nepotism and cronyism and the overbearing exertion of authority were less troubling then and, for the most part, illegal now.

The third area is the brisk and deft description Brown presents of the British attack on Washington in 1814 and the very blunt order that Tingey carried out after he had “satisfactorily ascertained that the enemy has driven our army and entered the City” to destroy the undefended Navy Yard. Tingey with a few other officers, civilian workers, sailors and Marines set fire to the powder trains in the yard’s warehouses. The fire they set aboard frigate Columbia spread rapidly to the storehouses and then the workshops. Then, the men set fire to the distant storehouses and hulls of three frigates at anchored in the river before they set off for the safety of Alexandria in two gunboats and the commandant’s gig. Tingey, in his official report, noted “he had been the last officer to leave the city and the first to return” to the wreck of the yard he had carried out and the looting of his home and the yard by the civilians who stayed behind.

As we near the bicentennial of the War of 1812, The Captain Who Burned His Ships is a book worth buying. Brown correctly places Tingey in his proper historical place.