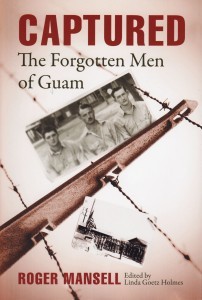 A labor of love for Roger Mansell that extended ten years, edited after his death by historian Linda Goetz (known for her writings on the POW experience in the Pacific War), this book stands as a harrowing tale of the POW experience of the men of Guam. The genesis of this stark tale is the author’s interviews of POWs and the realization that no book-length treatment had ever dealt with the men of Guam, whose experience had been largely forgotten between the events of Pearl Harbor and Wake Island and in the later horrors of the Bataan Death March. This book fills that void and serves as a lasting tribute to the memory of the brave men in harm’s way who paid the price for our nation’s unpreparedness and survived a cruel and barbaric captivity at the hand of sadistic Japanese.

There are a few remarkable qualities to this work that make it immensely worthwhile for any reader who has an interest in uncovering the truth about Japanese treatment of prisoners of war (which makes for deeply unpleasant reading) or understanding the grim fate of Guam during World War II. One of these qualities is that Roger Mansell (a man who had never written a book) managed to skillfully express the words of the POWs whose memories he recorded over long years of meticulous research, allowing the prisoners of war, through their memories, their diaries, and other primary data, to speak for themselves against the silence of oblivion. The result of their bravery in speaking about the traumatic experiences of sadistic torture and deliberate starvation, is a chronologically-based history that is framed in chapters with thoughtful quotations. In addition to producing a narrative honoring the memory of these brave men, Mansell clearly aimed to hold those who have attempted to whitewash Japan for their guilt in the handling of POWs as a whole. Here is an example from page 130: “To excuse the massive abuse heaped on the prisoners, revisionist historians choose to say that the Japanese were unprepared for such a huge numbers of POWs. The simple reality is that the Japanese society had become extremely racist and considered all other human beings as inferior.”

The book begins in looking at the somewhat idyllic days of the interwar period, where Guam was a remote and sleepy post with a somewhat incompetent commander and a somewhat luxurious and easy life for the civilians and military there. However, this paradise was not to last, as the known threat of the Japanese and the overwhelming attack of Japanese troops led the island to be rapidly subjugated by force shortly after Pearl Harbor. Despite this, one American managed to survive years of hunting by Japanese soldiers and escape to safety with the return of the Americans in the later stages of the war.

This book pulls no punches about the treatment of the Japanese, or about the divisions within the soldiers themselves (as well as the existence of traitors among the prison population) and the incompetence and venality of much of the officers and leadership. This is truly an enlisted man’s history, taken from the point of view of the Marines of Guam and other egalitarian soldiers (like the Australians) with a strong and open degree of hostility to deference and hierarchy and strong praise of any cooperation and decency of character that was found in the horror of captivity.

Taken as a whole, the contents of this book are remarkable in the matter-of-fact treatment of the brutality of the treatment of prisoners by the Japanese, who blithely disregarded the Geneva Conventions and showed no honor in their treatment of these men. The way in which theft and corruption and sabotage was taken advantage of by the clever servicemen to endure in the face of starvation and exploitation at the hand of the Japanese is a triumph of the spirit as well as the depths which good men must sometimes stoop to endure in the face of immense evil.

The author clearly harbored continued biases of Japan’s cruel character, in the fact that to this day he points out that Japanese youth routinely abuse the powerless by beating up the homeless, illustrating that he believes this demonstrates a fundamental lack of charity and loving kindness within the Japanese psyche, something this book exposes with ruthless clarity. The group cohesion of the Guamanian people as well as the Americans who bravely (if futily) defended them is worthy of being remembered, and this book serves as a fitting tribute to their struggle against cruelty in captivity. The contents of this book are difficult to read, but they are worth remembering and serve to fill a curious gap in World War II history. Hopefully this book will receive the audience it deserves and make sure that the struggles of the men of Guam are not forgotten.