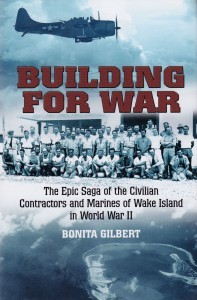 Wake Island is justly remembered in the military history of the United States for the heroic stand made by its few defenders against the might of the Japanese empire. But while the exploits of the Navy and Marine personnel assigned to that ill-fated atoll are known to many, few realize that Wake’s defenders included hundreds of civilian contractor personnel, men who had built the facilities that made Wake a desirable base, and who managed and maintained its air services and other infrastructure.

Bonita Gilbert’s book examines Wake both through the traditional lens of primary source documents and memoirs, and, since both her father and grandfather were members of the Wake workforce, the unique prism afforded her by family letters, records, and memories. (Her grandfather was providentially in Honolulu when Wake came under attack, but her father-to-be was taken prisoner, spending a grueling captivity on Wake, then in China, and finally in Japan). She sweeps across the historical experience of Wake, from its claiming as a virtual afterthought to the Spanish-American War, through its emergence as a waypoint on Juan Trippe’s Pacific skyway in the 1930s, its evolution into a small but significant bastion for America’s Japan-focused strategy on the eve of the Pacific war. The book contains an excellent selection of photographs and maps, though readers will note with some amusement that the principal map of the Pacific Ocean area in 1941 (pp. xii-xiii) is placed such that Wake Island is swallowed by the binding!

Though her primary focus is upon the actions of its civilian workforce, including her own father and grandfather, she is equally comfortable discussing the evolution of American naval strategy, the sad saga of Wake’s doomed defense, and the grim captivity experienced by its defenders, which at the outbreak of fighting numbered 523 military and 1,193 civilians. Of these, 92 died defending the island—48 military and 44 civilians, the latter numbering 34 from “Contractors Pacific Naval Air Bases,” a construction consortium, and 10 from Pan American Airways. But many more perished afterwards under conditions of appalling brutality on Wake, in prison ships transiting to Asian detention camps, in China, and in Japan. An unfortunate final 98 who were held on Wake were murdered on the island in October 1943, for which atrocity its last commandant, Admiral Shigematsu Sakaibara (who had personally beheaded the last surviving of the prisoners), was tried, convicted, and hanged on Guam in 1947.

Because of its multifaceted discussion, the title of the book unfortunately implies a far narrower and restricted work than Building for War actually is. Gilbert’s book is really a series of multiple stories, all skillfully interwoven: the Roosevelt administration’s use of civilian construction firms to expand overseas basing facilities via the program, and the experience and contributions of the workers of one firm, the Morrison-Knudsen Company of Boise, Idaho, including her own family members; the history of American interest and exploitation of Wake island (including its post-WW-2 use through the Vietnam war and into the age of anti-missile defense testing); the battle for Wake in the early weeks of the war; and the struggle for survival of the captured military and civilian Wake force enduring Japanese captivity afterwards.

In an era where the Department of Defense is heavily dependent on far-flung civilian work forces, there are lessons in this book that need to be taken to heart. While military and civilian authorities alike recognized the growing likelihood of war coming to Wake over the fall of 1941, too little was done to prepare the island—a critical waypoint on the Pacific skyway to the Philippines and beyond—for a possible Japanese assault. An overwhelming sense of innate superiority produced a generalized belief that any attack by Japan would be quickly and overwhelmingly defeated.

Thus, at the time of Pearl Harbor, Wake was undermanned, under-gunned, and had multiple deficiencies in equipment. Most seriously it had no radar, despite increasingly urgent memos from Admiral Husband Kimmel over the fall that radar be sent to the island as quickly as possible (pp. 177-8), and (despite its construction crews on-site) no blast-and-strafing-protective revetments to protect the twelve Grumman F4F-3 Wildcats of VMF-311 delivered by the USS Enterprise on a run that providentially took the “Big E” out of harm’s way on December 7.

Consequently, when Wake was attacked on December 8 by 27 Japanese twin-engine bombers, this single raid effectively destroyed two-thirds of VMF-311’s Wildcats (only the four already aloft escaped), and over fifty percent of its ground crew and pilots. Gilbert bluntly blames “Complacency and underestimation of Japanese capabilities,” noting that “a general contempt for Japanese capabilities had lulled many into a false sense of security.” (pp. 203-4).

Like their compatriots in the Philippines, after this equally disastrous beginning, the civilians and military on Wake fought with grim determination and remarkable courage, and Gilbert’s book does them a full measure of credit. She notes that in a popular motion picture on Wake, the contributions of the civilian workforce to the island’s defense were not merely ignored, but actually maligned, and thus her book offers an important corrective to the historical record.

Building for War is meticulously documented in primary sources and archival collections, but never suffers from the pedantic style all-too-commonly found in academic treatises. Indeed, the book is by turns intriguing, informative, gripping, and at times very moving. The defenders, civil and military, who fought on Wake are well-memorialized in this highly recommended and definitive study.

Dr. Hallion is a noted aerospace historian and a frequent contributor to Naval History Book Reviews.