(Editor’s note: This is the second in a series of blogs by Norman Polmar, author, analyst, and consultant in the naval, aviation, and intelligence fields. Follow the full series here.) 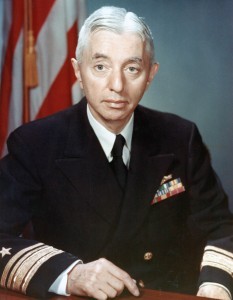 Soon after I went to work for Navy Times in late 1959, the editor-in-chief, John Slinkman, came over to my desk and dropped a newspaper clipping. I picked it up; it was about nuclear-propelled submarines. “Call Rickover and see what he has to say about this,” said Slinkman.

“Admiral Rickover?” I asked. “Do you know another?” he responded.

A few minutes later I called the Department of Defense operator and asked for Admiral Rickover. A secretary answered, I told her who I was. A couple of minutes later a gruff voice asked, “What do you want, Polmar?”

It was Admiral Rickover! (I later learned that if he was available he would usually speak to a calling journalist.)

“Sir,” I began and babbled something about who I was and how my editor had told me to call and ask him about . . . .

After a few seconds of silence, Rickover responded, “The Navy has [number] public affairs officers who have nothing better to do than sit on their fat asses and answer dumb questions like that.”

A few more seconds of silence. . . . “Where did you go to school?” he asked. I responded that I was attending night school at American University. He asked what I was studying and a few more questions about school. The conversation ended abruptly. No goodbyes.

Some time later Mr. Slinkman  again asked me to call Rickover. I did. The conversation was similar – no answers, but lots of questions about school. There were a few more, similar calls (by me) over the next couple of years. One conversation – about  school – lasted some 40 minutes.

Then, one day, I was in the john, sitting quietly, and doing my own business. Suddenly, from outside of the stall door I heard a female voice ask, “Norman, are you in there?” It was Elke, one of our secretaries.

“Admiral Rickover is on the phone for you.”

“Get his number, I’ll call him back in a couple of minutes,” I told her.

“I can’t come right now. Get his number.”

This exchange was repeated, twice.

A few minutes later, finishing that business, I returned to my desk and called Rickover.

“Polmar – where did you get the material for your article on page [number] of this week’s Navy Times?”

Panic! I drew a complete blank. After a second or two I recalled being told that one should never answer Rickover that you didn’t know something.

“Your testimony last year before the Joint Committee on Atomic Energy.”  Silence. Then, “What classes are you taking this semester?” This conversation was brief.

I knew that every year Rickover testified before the Joint Committee, and those printed hearings ran to hundreds of pages. I was certain that the answer to his question was “somewhere” in those printed pages.

During my four (great) years at Navy Times I spoke to Rickover several times. Our “relationship” ended when he learned that I was writing a biography of him. (He threatened to sue me, my publisher, and, I think, my parents and a few others, and tried to stop the book from being published.)

Admiral Rickover and I did meet, in July 1978 at the retirement ceremonies for my friend Admiral F.H.  (Mike) Michaelis, then Chief of Naval Material, in the sail loft of the Washington Navy Yard.  I was seated in the VIP section – an end seat in the second or third row. I noticed Admiral Rickover entering the loft. The retirement ceremonies had just started, and the “greeters” had left the door. Rickover looked around and began walking toward the “bleachers” (i.e., cheap seats!). I leapt up, walked quickly around the back of the podium to the entrance area, grabbed his arm, and steered him to my seat. He was in civilian clothes with a Navy raincoat, without insignia.

I went and sat in the cheap seats. Rickover did not know who I was.

The biography Rickover: Controversy and Genius (Doubleday, 1982), written in collaboration with Thomas B. Allen, has sold very well in several editions. Michael Douglas approached Tom and me and discussed making a movie (with his father playing Rickover); but Rickover learned of our discussions and that was the end of that project.