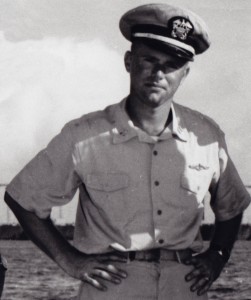 (Editor’s Note: We are pleased to present the first in a series of regular stories written by Norman Polmar, who is a longtime NHF member and supporter. Mr. Polmar is an analyst, author, and consultant specializing in naval, aviation, and intelligence issues. He has written or coauthored 50 published books in these fields, and is a columnist for the Naval Institute’s Proceedings and Naval History magazines. He has been an advisor or consultant to three U.S. Senators, the Speaker of the House, the White House, the Director of the Los Alamos National Laboratory, and to three Secretaries of the Navy. This series will address people he has met and things he has done… at least those he will talk about.)

On 23 January 1960, the U.S. Navy’s bathyscaph Trieste descended 35,814 feet into the Marianas Trench. This dive to the deepest known place on earth was accomplished by Lieutenant Don Walsh, officer-in-charge of the Trieste, and Jacques Piccard. The latter was the son of August Piccard, aeronaut and inventor, who had designed and built the Trieste, which the U.S. Navy had purchased in 1958.

Walsh, a bright young submariner, came to Washington shortly after the dive and was personally awarded the Legion of Merit by President Eisenhower in a White House ceremony. A year later, in January 1961, Walsh was again in Washington for Navy Department meetings. Vice Admiral John F. (Battleship) Shafroth invited Don and his assistant officer-in-charge, Lieutenant Larry Shumaker, to give a talk about the “deep dive” at the Naval Historical Foundation. (At time, the Foundation was located in the Stephen Decatur House in Washington, a block northwest of the White House.)

I attended the talk at the invitation of Shafroth, then president of the Foundation. He had befriended me, at the time a reporter/editor of Navy Times, a couple of years before. We two had several meetings and lunches, mostly talking about fast battleships, which he had commanded in the Pacific in 1945. He had been Admiral Nimitz’s deputy at the Bureau of Navigation—i.e., personnel—at the start of the war.

“Jack” or “Battleship” Shafroth was a big man, in height and girth.  And, he was a chest jabber.  To make a point he often would jab a finger into your chest.  One certainly remembered that point for a while.  But he was always polite, generous, and—at least to this young journalist—most helpful.

After Walsh’s talk at the Naval Historical Foundation there was a receiving line and then coffee and dessert were being served. As I stood in line waiting to shake hands with Walsh and Shumaker, Shafroth spotted me and called me over to him. He jabbed his finger into my chest, pointed to the two Navy lieutenants, and said something along the lines of, “When they’ve said hello to everyone they won’t want to hang around with us old fogies. Take them out and get them whatever they want.”

Gulp! I was somewhat naïve. How would I know what sailors “wanted.” At the appropriate time I steered Walsh and Shumaker to the cloak room, we collected out coats, and went out to my car. I asked what they wanted. Walsh replied, “coffee.”

We drove into Georgetown, to a café I knew, sat down, and ordered coffee (hot chocolate for me). The three of us sat there until early morning… drinking coffee (and hot chocolate) and talking about the Trieste, the deep dive, submarines, and the like.

Walsh and I seem to have hit it off. Over the next 50 years we kept in close contact; we had lunch or dinner whenever I was in the San Diego area and he was at home. When he commanded the submarine Bashaw I went to sea with him (and had wine on board with lunch and dinner… but that’s another story). We still are in contact. I was his guest at some of the festivities here in Washington in January 2011 to commemorate the 50th anniversary of the “deep dive,” and subsequently he has had dinner at my home.

Through Walsh I met several of the subsequent Trieste pilots, some of whom I worked with at the Navy Deep Submergence Systems Project in 1967-1970, and some of whom helped me with my book Death of the USS Thresher. Larry Shumaker, with whom I remained in limited contact, passed away in 2008 at age 76.

Walsh retired from the Navy as a captain and holds a PhD in oceanography. He is alive and well, traveling the world to discuss oceanographic matters and sailing on cruise ships to the Antarctic as a lecturer; he writes a column for the Naval Institute Proceedings on “ocean” issues.

The original Trieste, of course, now rests in the museum at the Washington Navy Yard.