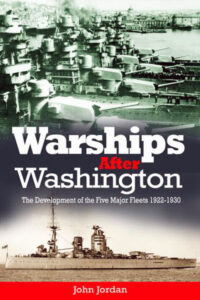 Warships After Washington: The Development of the Five Major Fleets 1922-1930 tells the story of the impact of the Washington Naval Treaty of 1922 on warship construction as the victorious nations tried to modernize their navies while facing financial strain, national exhaustion, strategic necessity and strategic ambition.

Jordan is a teacher of European languages who began writing in the 1970s about the Soviet navy. He is the author and co-author of many works on naval warfare including French Cruisers, 1922-1956 (2013) and French Battleships, 1922-1956 (2009), among others. Presently, he edits the annual publication, Warship.

A technical subject requires careful and consistent treatment. Jordan usually succeeds, but, though the writing is generally uncomplicated, this is not a book for the nautical novice. For example, the benefits of superheated steam and the problem of dispersion in rounds fired from triple-mount turrets appear without annotation (16, 113), so some familiarity with the subject will be helpful. Warships After Washington will likely be best appreciated by naval enthusiasts.

For the knowledgeable reader this work will be a helpful reference to the evolution of naval technology during the heyday of disarmament diplomacy. Jordan draws together summaries of the basic characteristics of the warship classes most affected by the Washington Treaty. That is the book’s principal advantage. Otherwise, the necessarily multilingual reader would be forced to scout widely in the literature for the same information.

The first four chapters of Warships After Washington provide the background to the later discussion of 1920s naval developments. The first chapter sketches a history of the naval status of each of the victorious powers, in most cases from the 1890s to 1921. The second chapter examines a few important postwar developments relative to established warship classes, and the third lays out the conference program. A short fourth chapter assesses the winners and losers.

The discussion of the disarmament conference itself is cursory, and a serious study should begin elsewhere (e.g. The Washington Conference, 1921-22: Naval Rivalry, East Asian Stability and the Road to Pearl Harbor, Erik Goldstein and John Maurer, ed.), though students of diplomacy would gain a better understanding of the practical consequences of the diplomats’ work by revisiting Warships After Washington  afterward. This cursory treatment is unsurprising; Jordan’s expertise lies elsewhere.

Jordan’s reason for writing Warships After Washington “was to attempt to bridge the gap between the political and the technical. Much has been written about the political aspects of the interwar naval arms limitation treaties by ‘professional’ historians.” The text suggests Jordan’s concern with the ‘professional’ historians might be their apparent lack of understanding and interest in the technical aspects of naval development. Still, these professionals aren’t the only ones he considers too narrow in their approach. “Likewise, much has been written about the technical side of warship development during the same period by reputable naval specialist authors. However, the latter have often been dismissive of the constraints of the treaty, and have generally had a narrow focus on a particular navy.”

Trying to describe all the major warships built by five nations during the 1920s in a single volume is a challenge. Jordan generally limits his descriptions to the major weapons carried, general engineering layouts, and armor installations with the level of detail restricted to bore size and caliber of weapons and similar details. He does not discuss emerging technologies such as communications, antisubmarine sensors, or the composition of air wings.

As Jordan notes, many studies in this field focus narrowly on a single warship type from a single navy. In contrast, Warships After Washington compares the development warships of the same type, not only within a single navy, but between navies. Comparisons are aided by abundant use of tables, photographs, and some sixty line drawings that show the general layout of major weapons and engineering spaces for battleships, cruisers, and destroyers, and a similar level of detail for aircraft carriers and submarines.

One minor aggravation is the unit conversion table. (ix-x) Jordan chooses to present various measurements in the text (gun bores, armor thickness, tonnage) according to national measurement standards. So, the English and U.S. follow the English system, the French, Japanese, and Italians use the metric system, but he inserts unnecessary complications. French and Italians measurements are given in millimeters and the Japanese in centimeters. One table (149) shows the characteristics of four ship classes, Surry class, New Orleans class, Zara class, and Algérie class. Two classes are shown with dimensions in feet followed, parenthetically, by their metric equivalents. The other two classes in the table have dimensions given in millimeters without the parenthetical annotation. Displacement is given in tons (tW) in all cases without indicating whether these are English or metric tons. (Other tables use “tons.”) The conversion table is helpful, but the tables and text would have benefited from more uniformity throughout.

Appendices contain the texts of the Washington Treaty and the 1930 London Treaty. Jordan has carefully mined the secondary literature, and a bibliography is also included. Probably the least developed part of the book is the index. This is little more than a list of warship names sorted by type. No effort is made to sort by nation or characteristics or by other key words.

Jordan has performed a very helpful service in compiling Warships After Washington. It will be a useful reference and an accessible entry point to anyone interested in warship development during the 1920s.

Larry A. Grant is an adjunct professor of history and oral historian at The Citadel, Charleston, SC.