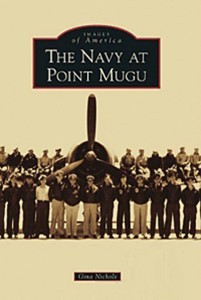 Written by Gina Nichols, archivist of the U.S. Navy Seabee Museum at Port Hueneme, California, this is another publication in Arcadia Publishing Images of America series. Point Mugu had developed as an upscale fishing camp during the years before World War II. In 1943, needing land on which to conduct amphibious training operations, the U.S. Navy acquired the fishing camp. During World War II, it was used by the Seabees for training in landing upon a hostile beach and in building a base upon capture of the hostile shore.

In 1945, the future of Point Mugu changed with the development of Naval Air Facility (NAF) Point Mugu. It was here that the U S Navy in 1946 tested the Loon surface-to-surface missile. This led to Point Mugu being designated on 1 October 1946 as Naval Air Missile Test Center Point Mugu. The next two decades would see Point Mugu testing and evaluating a number of missile systems: Oriole, Lark, Gorgon, Regulus I, Regulus II, Harpoon, and other missiles.

In 1962, Navy Astronautics Group was organized at Point Mugu. In 1990, this unit became Naval Satellite Operations Center. Then on 11 October 2000, NAS Point Mugu and Construction Battalion Center Port Hueneme were merged to become the present day Naval Base Ventura County.

The author, using over 200 pictures spread over 138 pages, tells the above story in great visual detail. Each photo is accompanied by a concise description of what one is seeing but also its place within the history of Point Mugu. Photo coverage includes not only events taking place at Point Mugu between 1930 and 2000, but also reaches out to include facilities on the Channel Islands and support ships and craft. The photos within the book include aerial coverage of Point Mugu during different time periods so one can see its development plus shots of buildings, events, personalities, and equipment. The author has provided an excellent and concise history of the U S Navy at Point Mugu from World War II through the Cold War and on to today’s War on Terror.