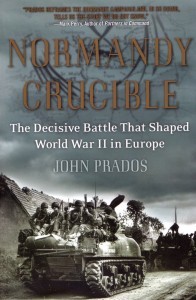 One of the meanings of the word “crucible” is “severe test,” and the Allied invasion of France in WW II was certainly every bit of that for each side. Prados draws on both Allied and German sources to resolve some seeming discrepancies in earlier recounts of the Normandy campaign, as he walks us through the major battles, from D-Day on the beaches on June 6, 1944 to the “Corridor of Death,” outside the city of Falaise, nearly three months later. The D-Day landings are relatively glossed over in favor of concentrating on the later battles, particularly those in Operation Cobra. One of the more unusual aspects of this operation was the repeated use of close-in bombing to soften up the enemy elements. However, due to last-minute cloud cover and other causes of bad visibility, this tactic also resulted in Allied “friendly fire losses” of thousands of lives. Prados analyzes the military planning and decision making and, of particular interest to those in military intelligence and cryptology, works in the details of how the Allies knew Nazi military orders almost as soon as they were issued, a tremendous advantage on the battlefield.

Prados went so far as to run extensive war game simulations of the events, to see if any of the contemplated, but discarded, strategies would have produced significantly different results for either the Allies or the Germans. He found no such outcomes on any meaningful level of statistical confidence.

The end-notes are extensive and the bibliography is outstanding. There are 34 photographs, but two are duplicates with differing titles. Unfortunately, there are two significant weaknesses in this book: first, it lacks military tables of organization that show who reports to whom, on both sides. Although this is explained in the text to some extent, one almost feels compelled to make a table of one’s own, in order to better follow the flow of orders and how they impacted the battlefield. Second, the discussions of battles and strategies are difficult to follow without seeing an appropriate number of suitably detailed and labeled maps. The maps provided are far too few (just six), hard to read (only two are of a sufficiently small scale to be clearly understandable), and are not located adjacent to the pertinent text – defects that detract significantly from an otherwise clearly written and interesting book.