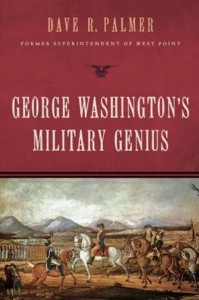 This small book (only 230 pages of text) is a gem, in that it takes a brief premise which is developed simply, elegantly, and completely. One of the most enjoyable aspects is General Palmer’s masterly writing style, which is marked by great clarity, precision, and panache. He builds a simple but comprehensive analysis of how George Washington managed to fight a successful war against a vastly superior enemy force over a period of nearly eight years, while dealing with a fractious Continental Congress – America’s government, since there was no executive branch. The author points out that Washington successfully dealt with four distinct phases of the Revolutionary War, each of which required him to formulate and execute four different strategies. It is notable that many historians in the past half-century have failed to distinguish between these phases, or to credit Washington for his adaptability in creating different strategies and executing them successfully.

The author organizes the book into two parts: strategy described and strategy executed. In the first part, the term “strategy” is defined and the nature of 18th century warfare reviewed. “Set piece” battles were the norm, where each army’s infantry faced each other at dueling range, and kept firing their flintlock muskets at one another until the side with the most casualties either fled, surrendered, or died, a “deformed” system of fighting, as the author terms it. While commanded by gentry, the ranks of European 18th century armies were filled from the bottom layers of the society.  Next, he outlines the geographic setting of the Revolutionary War. The American citizenry of 2 ½ million was highly dispersed, with only four cities (Boston, New York, Philadelphia, and Charleston) having a population of 10,000 or more. The third and final chapter of this section describes how the leaders of the English government – King George III, Lord North, and the Earl of Dartmouth – were remarkably unqualified and uninformed to deal successfully with the American Revolution.  These deficiencies lead to the appointment of three generals, Howe, Clinton, and Carleton (none of whom were any better informed than the king and his ministers) to relieve the current general in the colonies, Gage. A series of strategies were considered by the English, to invade and hold New England and the Hudson River Valley, or take and hold the Middle Atlantic colonies, or ditto the South, or simply blockade the American ports. Each strategy was tried in desultory fashion during the course of the War but without conclusive results.

In strategy executed, the conduct of the war is divided into four periods, of varying length, depending on the level of activity. Much happened during April 1775 through June 1776, starting with the beginning of the war with the “shot heard round the world” at Lexington, followed by the Battle of Bunker Hill, and the capture of Fort Ticonderoga. Washington took the offensive when and where he could, but this period also included the defeat of Benedict Arnold’s army at Quebec. In the period of July 1776 to December 1777, Washington turned to a defensive strategy – with the critical exceptions of Burgoyne’s defeat at Saratoga and Washington’s victory over England’s Hessian mercenaries at Trenton, which shocked the English, and drove them back to New York. The third period, January 1778 – October 1781, saw the French declare war on England and ally with the Americans, allowing a renewed offensive strategy. The English brought the Indians into the war in Pennsylvania and New York, but the Americans countered with successful punitive raids that effectively shut down this front. Spain also entered the war, capturing English outposts on the Mississippi. However, both France and Spain proved unreliable military allies, although they did keep the English from concentrating their forces on the war with the colonies. This chapter ends with Washington’s victory at the Battle of Yorktown, a crushing defeat for the English. The fourth period, November 1781 – December 1783, describes how American victories on the battlefield were endangered by protracted negotiations. Washington managed to hold the unpaid Continental Army together long enough for a satisfactory peace treaty to be signed.

Palmer’s book is eminently worth reading, no matter how familiar one is with this period of our country’s history. He succinctly captures the difficult choices that Washington faced and shows how and why he made decisions that ultimately won the War of Independence.