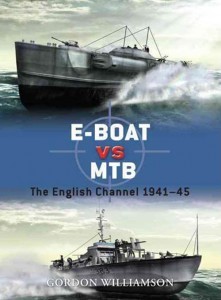 E-BOAT vs. MTB is Gordon Williamson’s latest contribution to Osprey Publishing Company’s Osprey’s “Duel” series of short works that emphasize the “…account of machines of war pitted against each other and the combatants who operate them.”

With E-BOAT vs. MTB, Williamson traces the six-years of combat between the British and the Germans in the waters of the English Channel and the southern North Sea during the Second World War. While not as widely known (especially by many Americans) as the Battle for the Atlantic, the war in this narrow sea that Williamson describes is noteworthy in that each side conducted aggressive convoy defence (more so for the British) and interdiction operations, to include extensive mine warfare operations. In this reviewer’s opinion this battle should be seen as an extension of the great Atlantic battle, and without the eventual success of the Royal Navy in winning control of these waters, the landings at Normandy might have been more costly.

The Royal Navy entered the war tragically deficient in the type of coastal forces needed to counter the E-Boats (Schnell S-Boots) of the Kriegsmarine, which from almost the beginning of the war caused major damage to British coastal convoys plying up and down England’s east coast. In fact, by war’s end the E-Boat came second only to the U-Boats in the tonnage sunk of allied shipping. However, by 1944, British strategy, operations and technological innovations battered down the effectiveness of the E-Boat.

Williamson weaves the strategy, operations and tactics employed by the antagonists with the technological specifications of the types of craft and their weapons. I for one, found his treatment a little uneven, although the reason for this is likely due to Osprey’s abbreviated format.

The text is accompanied by numerous line drawings of the various coastal craft used by both sides, together with their weapons. Illustrator Howard Gerrard produced two dramatic battle scenes depicting the ferocity of close combat between high-speed craft. One depicts the tragedy that occurred along the southern English coast at Slapton Sands just before Normandy, when E-Boats caught a flotilla of nine U.S. Landing Ship Tanks (LSTs) that were preparing to conduct a full-scale amphibious training exercise. Two of the LSTs were sunk and over 600 men were killed, whilst over 300 more were killed by friendly fire.

E-BOAT vs. MTB: The English Channel 1941 – 45 provides the reader with just a taste into what the battle for the English Channel and the North Sea was like. For those who wish to know more, I would recommend The War of the Gunboats, by Bryan Cooper and E-Boats in Action in the Second World War, by Hans Frank. Finally, for an excellent treatise on the naval war in the Channel and North Sea, I recommend Peter C. Smith’s history, Hold The Narrow Sea: Naval Warfare in the English Channel 1939 – 1945. Smith’s work fully captures the totality of naval warfare as it was conducted in these coastal waters.

Captain Rodgaard is the co- author of “A Hard Fought Ship – The Story of HMS Venomous.”