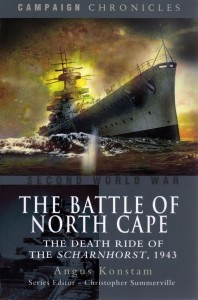 Angus Konstam’s Battle of North Cape brings to light this forgotten engagement with balance and flair. The lack of primary sources of the German side of which there were only a few dozen survivors has made it difficult for historians to create a fair assessment, and the Barents’ Sea Murmansk convoy campaign has always been overshadowed by the Battle of the Atlantic. Comparatively speaking, the Bismarck saga spawned many fine volumes of naval literature, from Baron von Mullenheim Rechberg’s A Survivor’s Story to Ludovic Kennedy’s  Pursuit  to Konstam’s own installment, Hunt the Bismarck. Sadly, the Scharnhorst‘s story has remained largely overlooked and misunderstood.

Konstam’s well researched prose grants the reader an appreciation early on in the story for the motivations behind the combatants. The equitable and balanced storytelling offers detailed explanations and reasons for the decisions taken by the combatants, steering clear of judgments based on 20/20 hindsight with all its attendant and unfair criticisms. The subtle respect that is weaved into the story makes the reader aware of what the protagonists may have had going through their own minds, assisting the reader to effectively decide for themselves what happened while trying to explain the uncertainties that to this day remain. Also helpful to the storyline is the author’s constantly changing point of view that tells the story as the Allies would have seen it for a few pages, then back to a German headquarters, bridge or plotting room, mentioning appropriate sources along the way that help illuminate the story.

Few, if any accounts can bring the reader to understand just what happened during this confused engagement which was a prolonged chase of the Scharnhorst groping in the Arctic darkness on the part of superior Allied forces. Other works might have been largely based on survivor’s interviews in the immediate postwar, such as Fritz-Otto Busch’s account, and while meritorious in their own right, are nowhere near as enlightening. For example, history has been harsh on Admiral Bey, with many well-known accounts of this battle often criticizing him for ordering his destroyers to fan out or steering the Scharnhorst in a given direction when in reality it was the weather creating confusion and causing the German formation to scatter for no good apparent reason. Of particular importance is the attention the author dedicates to explaining the effects of Ultra and codebreaking, whose role in the Second World War was little publicized and therefore not well understood by historians until recently.

You might try to compare Angus Konstam to Jim Hornfischer’s highly cerebral, extremely engaging prose. Sadly Mr Konstam had to make do without the use of veterans’ input, but it is no less effective. The style and particularly the rhythm of the sentences is both synesthetic and onomatopoeic. Passages detailing sighting reports read stilted, blaring in the way you’d feel if you were the admiral or coder receiving the report with Morse code chirps arriving in the background. Gradually the tension builds with a rumbling crescendo. The sequence built around a climax and his treatment of mostly rising and subsequent relief in the internal tension of the audience is too skillfully crafted to be a coincidence with the feel of a classic, epic tragedy. Telling is the use of this admirable but flawed protagonist acting out of pride who teases, tries to evade but is inevitably brutally slaughtered by fates that are far more powerful than he. While as in Greece or Shakespearean England, the audience knows the protagonist is doomed, the author still maintains a visceral tension with a series of twists that leaves the reader guessing until the Scharnhorst and her crew finally met their frigid, oily grave. Let us not forget the catharsis that the audience will experience when met with this definitive account of a misunderstood battle.

I whole heartedly recommend Battle of North Cape. It’s a treat for history buffs that offers technical, intellectual, and spiritual satisfactions while using never before published information to bring new insights to light. Admiral Fraser who commanded the Royal Navy against Scharnhorst summed it up well: “I hope that if any of you are ever called upon to lead a ship into action against an opponent many times superior, you will command your ship as gallantly as Scharnhorst was commanded today.” Angus Konstam has written the definitive masterpiece of the Battle of North Cape that describes exactly why.