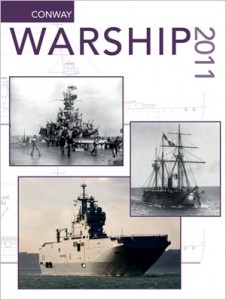 The annual Warship series covers a wide variety of naval topics, both historical and contemporary.  Last year’s edition covered three main subjects: naval strategy and tactics, naval architecture, and naval incidents and developments.  Many of the essays contained in this volume are particularly relevant to some of the questions facing world navies today.

Two of the essays in this volume dealt with naval strategy and tactics, one on the naval battle of Casablanca and another on a little-known skirmish between Chile and Spain in 1866 that almost involved British, American and French forces.  Both essays walk the reader through the vital decisions that helped determine the outcome of the battles; driving home the point that neither event was predetermined.  Both authors present well-researched and very detailed papers that are the result of a good mix of both primary and secondary sources.

The papers on naval architecture were also well-researched, and dealt with inter-war designs such as the Lexington-class battlecruisers, a French battlecruiser that never left the drawing board, and the evolution of small cruiser designs by the Royal Navy, as well as modern European amphibious assault ships and a secret Italian hydrofoil project begun during World War II that came to influence post-war hydrofoil designs.  The authors of the two papers on the Lexington-class and British small cruiser design in particular, show the long years of deliberating over inter-war ship design resulted in the ships that fought during World War II.

The paper on European amphibious assault ships is the most straightforward essay in this volume, giving a complete overview of, and explanation of the construction and intended application of the new Spanish and French multi-role LHDs.

The third category of essays contained in this volume is a little more difficult to place in a specific category.  They either shed new light on naval incidents, such as the capsizing of the Japanese destroyer Tomozuru in the 1930s or the grounding of the HMS Effingham during World War II, or describe the construction of and service life of Russia’s first three ironclad vessels, or France’s first armored cruiser, the Dupuy-de-Lôme. I was especially impressed by the essay on the Tomozuru incident, where the author asserted that the incident had a ripple effect on Japanese shipbuilding and design in the mid-1930s that set back Japanese shipbuilding in a way that put them at a slight disadvantage at the start of World War II.  The essays on the HMS Effingham and Russian ironclads were well-researched and enlightened me to some little known stories of maritime history.  The essay on the French armored cruiser painted a sad portrait of a ship that became dogged with engineering trouble throughout her life.  My main concern with this essay was the tediousness of the engineering details, which, however necessary for the cruiser’s story, became too numbers-heavy.

This was my first book in the Warships series that I have reviewed and I have to say, it was basically a combination of Proceedings and Naval History, only with less of a word limit!  Well-researched and covering a wide variety of naval history and architecture, these essays will be a pleasure for any naval historian looking for something between a magazine article and full-blown book.

Kempton Baldridge has a BA in History from Johns Hopkins University and is currently undergoing the process of joining the U.S. Coast Guard!