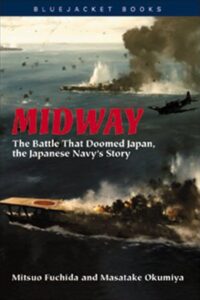 “They had no right to win. Yet they did, and in so doing changed the course of a war…” (Incredible Victory, IX)

Walter Lord used these words to describe the American forces that fought at the Battle of Midway. Three American aircraft carriers and their escorts, along with forces stationed on Midway, held off, and defeated, a large force of the Imperial Navy’s Combined Fleet. It appeared that David had, again, slain Goliath. As with many things, the story was not so simple.

When Midway: The Battle That Doomed Japan was published in 1955 by the Naval Institute Press, a translation and expansion of the 1951 Japanese version, many embraced it as an important and pivotal addition to the literature of the battle. Unlike Germany, which saw a number of postwar memoirs published by all manner of veterans, the Japanese did not rush to get their stories told after the war. Jonathan Parshall and Anthony Tully later observed in the differences in the Japanese national culture played an important role, as few had reason to lose face by recounting tales of their own defeats (See Shattered Sword: The Untold Story of the Battle of Midway, Potomac Books, 2005).

Mitsuo Fuchida was among the first Japanese veterans to publish their story and his words were devoured by Western historians who realized the importance of Fuchida’s “understanding” of the battle’s critical moments. However, to quote Parshall and Tully, “unfortunately, it is clear in retrospect that Fuchida was not a faithful narrator” (Shattered Sword, p. 437).

For more than sixty years, the work of Fuchida and Masatake Okumiya on the Japanese side of the Battle of Midway was taken as the authoritative account by the likes Gordon Prange, Walter Lord, and other Western historians. Fuchida, an important player in the early Japanese successes, transmitted the famous “Tora! Tora! Tora!” message during the raid on Pearl Harbor. As one of the few surviving officers of the battle, he could offer insights into the command decisions made on the bridge of the Akagi that June morning. What actually happened during the morning hours of 4 June on the bridge of the Japanese flagship Akagi? What allowed for the “miracle” and “incredible victory”, in the immortal words of Prange and Lord, to transpire? Midway: The Battle That Doomed Japan added details that caused subsequent authors to ascribe such adjectives to the battle. The book created its own mythos, adding to the already fair amount from the American side that colored the history of the battle until recent scholarship, on both sides of the Pacific, showed Fuchida to have been less than honest in his retelling of the engagement.

Midway offered a unique look at the Japanese side of the battle, from the genesis of the battle plan to the analysis of the defeat. It placed the reader alongside the participants in those crucial moments. Historians and readers were, for the first time, able to see the battle through the eyes of the Japanese. Given the importance placed on the Battle of Midway during the Pacific War it is little surprise the book was so devoured by Americans. The narrative supported American preconceptions about the battle and added a number of its own. Therein lies the problem of the book. Midway, while showing the Japanese side of the battle like never before, also sought to “explain” or place blame for defeat on a wide set of circumstances that supported American ideas of what happened. From criticizing Genda for not ordering a two-phase search plan, something the Imperial Navy did not even introduce until 1943, to stating the decks of the Japanese carriers were only moments away from launching their own strike against the American carriers, Fuchida’s version of events went unchallenged in the United States until Parshall and Tully published Shattered Sword.

In contrast, the same was not true of Japanese scholars, who raised issues about Fuchida’s narrative decades ago. Senshi Sosho, as part of the 102 volume Japanese War History written during the 1960s and 1970s, examined Fuchida’s statements and found many of them to be untrue. This information did not make it to the United States because, even today, only a few of the volumes have been translated into English. Parshall and Tully were some of the first Western scholars to utilize Senshi Sosho in their work and in so doing redefined how Western scholars view the battle, albeit almost forty years after the Japanese discovered the problems with Fuchida’s version of events. This is not to say that Midway does not have a place in the historiography of the battle.  It is still an important source and provides a unique view of the decisions that influenced the outcome of the battle. But, it must be balanced against, and augmented by, the scholarship of the Japanese and the recent work of John Lundstrom and Craig Symonds.  Parshall and Tully, in particular, utilized Japanese sources in writing Shattered Sword that first exposed Western readers to the problems with Fuchida’s recollections.

The Battle of Midway was still an incredible victory for the Americans, just not in the manner that Fuchida relayed all those years ago.

Jason McHale, a graduate of Norwich University’s School of Graduate Studies Class of 2008, is an adjunct history professor at Quincy College in Quincy, Massachusetts.