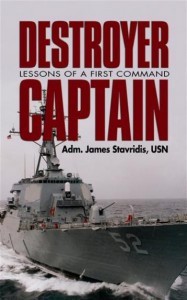 Admiral James Stavridis is a prolific writer. Perhaps most well known are his contributions in the U.S. Naval Institute’s Proceedings, and USNI blog. Admiral Stavridis has also contributed to similar publications such as the Naval War College Review and Joint Force Quarterly.  The sum total of what the admiral has written (and will likely continue to craft) creates a valuable body of knowledge and insight.

Through the Naval Institute Press, Admiral Stavridis co-authored editions of Command at Sea, Division Officer’s Guide, and Watch Officer’s Guide. He is also the author of Destroyer Captain, a book derived from his personal journal compiled while in command of USS Barry (DDG-52).

Destroyer Captain is a memoir first, a collection of lessons learned second. To be sure, there are nuggets of naval leadership, such as commentary on the nuances of ship handling, and philosophical discussions about the theater of command. So while there are stories of meting out punishment at mast and suggestions on how to mentor junior sailors and officers, these are balanced with descriptions of liberty and the repast of various restaurants on the French Riviera.

Then Commander Stavridis assumed command of Barry in 1993. The second ship in the Arleigh Burke class, Barry employs the Aegis weapons system, and is thus commonly known as an “Aegis destroyer.” During his tenure Barry and her crew performed missions across the entire spectrum of a destroyer’s capabilities.

Within days of his turnover Stavridis and Barry departed for Haiti to enforce economic sanctions against General Raoul Cedras and his cronies who ousted President Jean Bertrande Aristide. Barry conducted maritime intercept operations to include visit, board, and search of vessels to ensure they were not carrying cargo that was deemed verboten. It was a great opportunity for Stavridis to evaluate his crew.

After this initial sojourn, one that American Sailors before and since refer to as a “Haitian Vacation,” Barry prepared for a Mediterranean deployment as part of the George Washington Battle Group. Stavridis writes of the highs and lows of inspections and pre-deployment training cycles.  There are times when the crew on Barry feels tension, that faltering may prove fatal under an inspector’s eyes. Inevitably, Barry emerges triumphant, marked as the best performer ever. When it is finally time to deploy, captain and crew are ready.

The summer of 1994 marked the 50th Anniversary of D-Day.  Barry joined a flotilla that served as a backdrop for commemoration events on the Normandy Coast. It was a poignant moment of reflection, a time to consider the seriousness of military life for the entire fleet.  The deployment then included duties as “Red Crown”(air traffic control) in the Adriatic, missile firing exercises near Crete, and a transit through the Suez Canal with San Jacinto and George Washington –  a “surge” in response to saber –rattling by Saddam Hussein. There are also more mundane events, such as maintenance periods in Toulon, France and Naples, Italy. Through all of this captain and crew prove to be the best in the Atlantic Fleet and are awarded the Battle “E,” and more importantly, the coveted Battenberg Cup.

Destroyer Captain is a quick and enjoyable read. The writing flows like a good conversation with an old friend. This occurs in part because the chapters are short and succinct, enabling the reader to zip through the prose. Particularly valuable are transcripts of Stavridis’ speeches to his crew on Memorial Day and during the Change of Command at the end of his tour.

The prime audience for Destroyer Captain is those in the commanding officer pipeline, but as a source of individual study rather than a classroom text. It is recommended for anyone who is interested in or has fond memories of naval service.

Stephen Phillips is the award-winning author of Proximity: A Novel of the Navy’s Elite Bomb Squad and the forthcoming novel about the U.S. Naval Academy, The Recipient’s Son.