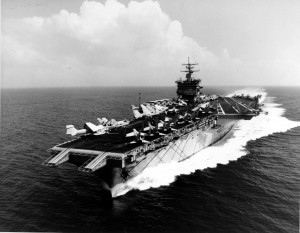 The inactivation this Saturday 1 December of USS Enterprise (CVN 65) at Naval Station Norfolk will mark the latest chapter of a close relationship between the Naval Historical Foundation (NHF) and one of the Navy’s most historically significant vessels.

In fact that NHF-“Big-E” relationship turns out to be pretty personal.

For example, long-time NHF archivist Ray Godfrey served in Enterprise as a plankowner dating back to when the ship was commissioned in November 1961.

Ray has remained involved with the USS Enterprise Association and joined the ship in November as a personal guest of the commanding officer for the Tiger cruise from Mayport, Florida to Norfolk, Virginia as the ship completed her 25th and  final deployment. He will be attending the inactivation ceremony.

Joining Ray at the 1 December festivities will be NHF Executive Director Captain Charles T. Creekman Jr.  While Creekman never served in Enterprise himself, his father Charles T. Creekman Sr. was Enterprise’s Supply Officer for 1964’s Operation Sea Orbit “around the world” cruise, as well as the ship’s first combat cruise to Vietnam in 1965-66. The NHF Executive Director recalls riding the ship on her first family cruise in 1964: “That was the first Navy ship I had ever been aboard at sea, and that experience helped confirm my decision to apply to the Naval Academy and make the Navy my career.”

At the time, Creekman Sr. worked for Captain James L. Holloway III. As the ship’s third commanding officer, Holloway had the opportunity to command the ship during two combat tours off Vietnam. In his book Aircraft Carriers at War, Holloway discusses the advantages Enterprise had over her conventional-powered counterparts. Not needing bunkers to carry fossil fuel for her own propulsion, Enterprise had additional stowage capacity for aviation fuels and armaments, enabling her to remain on station for longer periods.

Holloway, following his tour as the Navy’s twentieth Chief of Naval Operations, assumed a leadership role with the NHF as president and then Chairman from 1980 through 2008.

It was during his tenure in the year 2000 that the NHF-Enterprise bond became particularly close. The connection was made following staff historian Dr. Dave Winkler’s embarkation in Enterprise in April 1999 to document the ship’s lead role in Operation Desert Fox – a series of punitive air strikes against Iraq conducted in December 1998. During his two week visit to the ship, Winkler, a commander with Naval Reserve Combat Documentation Detachment 206 and Captain Jim Noone interviewed some 60 participants of the airstrikes, including the first female naval aviators ever to fly in combat. Standing outside of the Commanding Officer Captain Marty Chanik’s stateroom prior to an interview, Winkler noted a picture of Holloway in khakis which contrasted to all of the other former commanding officers who donned the more formal service dress blue uniform.  When Winkler informed Holloway that he was out of uniform, Holloway dashed off an apologetic letter with a proper picture to Chanik’s successor, Captain James “Sandy”  Winnefeld. Following exchanges of correspondence, the NHF took on the role as “banker” for an effort to install a heritage display room within the ship to discuss the history of CVAN/CVN 65 and her 7 namesake predecessors.

One of the contributing corporations to fund the heritage display room was none other than Enterprise Rent a Car. Dr. Winkler had conducted a oral interview with Enterprise Rent a Car founder Jack Taylor who named the company in honor of the World War II carrier he had flown off off. The anchor off that warship is displayed just outside of the Naval Historical Foundation/Naval History and Heritage Command building at the Washington Navy Yard.

Following the opening of the display room in 2001, the NHF-Enterprise relationship continued as NHF welcomed various contingents of Enterprise Sailors of the Year as they visited Washington to take in the Nation’s capital and meet senior Navy officials and lawmakers.

One of the stops on these visits is the Navy Museum and the NHF-supported Cold War Gallery,  which contains a model of Enterprise as she appeared in the mid-1960s.  The model was donated to the gallery by Admiral Holloway.

Although Enterprise will no longer be a commissioned warship, NHF remains committed to telling her story for decades to come! The Foundation recently purchased missing cruise books for the Navy Department Library’s cruisebook collection to ensure that all 25 deployments are represented.

Thus in celebration of this long-standing relationship the NHF is offering a commemorative challenge coin through its Navy Museum store.. Fittingly, on the back of the coin the following is engraved: “Since 1775 Eight Military Ships have carried the name Enterprise – Keep the Name Alive.”