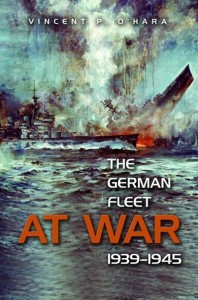 Much has been written about the German warships Bismarck, Graf Spee, and Scharnhorst and their mêlées while overlooking the lesser known battles during World War II. Vincent O’Hara, an independent scholar tries with his text The German Fleet at War 1939-1945 to close this gap. Originally published in 2004, the book is now available in paperback through the Naval Institute Press. O’Hara states that he “unexpectedly discovered that the details fit together like a jigsaw puzzle to reveal a bigger picture … and that the navy evolved in six years. The surface fleet was much more than a few doomed battleships” (viii). All sixty nine engagements fought by the German navy are listed, but unfortunately O’Hara excluded the many actions involving motor-torpedo boats, auxiliaries, and armed merchant cruiser or raider from his research. For instance the history of the invasion efforts and sinking of the light cruiser Karlsruhe at Kristiansand during Operation Weserűbung is completely overlooked as are many other battles fought between 1939 and 1945 by the German navy.

The thirteen chapters, preface, and conclusion are listed in chronological order of the war. Furthermore an appendix, graphics, photographs, and maps are included. In general the publication lacks footnotes and original research and it is difficult to fact check the primary sources given since no records groups for the few sources used are given. The most glaring omission however is the absence of any German sources either primary or secondary. It is hard to comprehend for this reviewer how a text dealing with the German fleet has not one German archival source listed. A good start would be the publications from the Militärgeschichtliche Forschungsamt or Kriegstagebuch der Seekriegsleitung,1939-45.

The lack of original research is evident in the fact that while O’Hara looked at Admiral William Whitworth’s report to the British Admiralty and the subsequent findings, he quoted the London Gazette. This publication is not the official source for British naval history and is furthermore available through the internet.  The title of the work is also misleading; O’Hara wrote a condensed battle history of the German navy, not a history of the German navy at war. The author offers no analysis after the short chapter narratives which only describe the battle conditions and battle itself but not the aftermath of it. Likewise in this reviewer’s opinion, Mr. O’Hara shows bias since he starts always with the allied ships involved first, followed then by the German ships, although his focus is on the German fleet. The text suffers from a last editing, some of the German words are misspelled, so is Hitler’s first name.

For each confrontation the author listed the time, type of encounter (encounter, interception, convoy or harbor attack), weather and visibility, the state of the sea, surprise, and the overall mission of the attack. He then supports his findings with a short narrative, maps, and a table of vessels involved on both sides and then presents detailed accounts of the action.

His research led him to the conclusion that the German commanders of vessels “displayed excessive caution in the face of the enemy and even let victory slip away” (259). O’Hara sees this in the German tradition without giving any other hint to the historiography on this topic. Neither Alfred Tirpitz nor Wolfgang Wegener and their opposite theories in naval warfare are mentioned by O’Hara in this context. He believes that the German naval tradition did not approve of combat for the sake of combat and he based this conclusion solely on one account, that of Captain Hans-Jürgen Reinicke’s assessment given in 1957 and who was the last commander of the Prinz Eugen.

In all, this text is not a complete account of the German fleet at war between the years 1939-1945 and contributes little to the existing research. Nevertheless it offers enough details for a naval enthusiast. In a revised edition, the author should expand his conclusion, there should be more explanations of how the individual battles are linked together to give the reader a larger, more complete picture of the German fleet.

Simone C. De Santiago Ramos is a graduate student with the Department of History, University of North Texas.