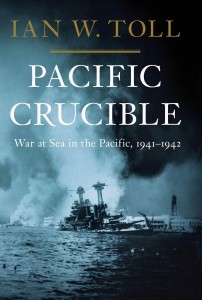 Do not expect an objective review to follow! I was an immediate fan of Ian Toll when I found his first book Six Frigates in a gift shop on the Newport, Rhode Island waterfront.

The continued series of books that cover the Pacific War, most centered on Midway, is somewhat amazing. This reviewer, having started –  you can guess the dates, with the original printing of Guadalcanal Diary (1943) by Richard Tregaskis, and proceeding through Tarawa, The story of a Battle, Robert Sherrod (1944), all World War II volumes of Battle Report, Capt. Walter Karig, USNR, and, of course, Samuel Eliot Morison’s History of the United States Naval Operations  in World War II. (Volumes were taken on several cruises leaving dog-eared dust jackets.)

Then, Mitsuo Fuchida’s Midway: The Battle That Doomed Japan (1955). And the more recent books, as Japanese records became available, Shattered Sword, The Untold Story of the Battle of Midway  Jonathan Parshall and Andrew Tully, (2005), and even more recently A Dawn Like Thunder, (2008), by Robert A. Mrazek.

Toll pulls it all together with logic and vivid word pictures of the action.

The lengthy prologue weaves Mahan and The Influence of Sea Power Upon History smoothly into the back ground, focusing on its impact on the thinking of Japan. As Mahan remarked:  “. . .more of my works have been done in Japan than into any other one tongue.”(xix) As the 20th Century arrived the United States was beginning to realize that it did have two coasts, in part due to the Spanish American War, and the deeds of Teddy Roosevelt; including the Great White Fleet. On the other side of the Pacific, the overwhelming victory at Tsushima in 1905 gave the Japanese international recognition.  At the same time the treatment of the Japanese emigrants following the San Francisco earthquake in 1906 (pp. xxix-xxxi) was certainly remembered by Japanese Navy crews as carrier torpedo and bomber aircraft devastated Pearl Harbor.

By 1914, the U.S recognition of the potential of the Japanese as a rising power led to War Plan Orange becoming a part of the studies on the gamming floor at the Naval War College in Newport, RI (xxxiii)

Chapter One covers the attacks on Hawaii with eye witness realism — not just smoke and flames, but believable and uncomfortable scenes of the aftermath. The reaction in Washington is described, highlighting the confusion we all have come to know. These detailed paragraphs continue through the following pages and chapters. Toll leaves little to the imagination as he continues, again with colorful coverage of the attacks on the Philippines, and a discussion of General MacArthur’s staff reactions who were “effectively paralyzed.” (pg. 48) This begins a combination of lessons in both asymmetric warfare and the total un-preparedness, with excruciatingly slow recognition of the need to get ahead of the problem.

As the text continues, chapters smoothly set up each next event. This may not be unusual, but it was very effective in drawing the reader into turning the next page in anticipation.

Chapters 3 and 4 provide detailed background, first of the Japanese history and culture with several pages covering Yamamoto’s background and personality. He wouldn’t last after one news article in today’s papers. If he did, he would be on he front pages at least weekly. He was well traveled, educated and he did not hold the Japanese Army in high regard (pg. 70).

The transition of the Japanese population, from emulating the West in the 20s to the mid-30s, when “it was no longer safe to hold dissenting views” does not follow the paths of Hitler or Mussolini.” (pp. 75-76) It appeared to the Japanese that the Western nations were “secretly in league against Japan.” (pg. 82) From the September 1931, the “Mukden Incident,” Japanese troops fought the Chinese Nationalists leading to the well-remembered atrocities, e.g., The Rape of Nanking (An early issue of Life Magazine contained graphic photos).

This reader felt very uncomfortable with a lengthy discussion of the retelling of the increasing iron fist the Army yielded over the population during the war in China, and throughout the War. The reason being was a close former Japanese colleague who the reviewer worked with and who, as a high school student, was given a sharpened bamboo spear.  When the invasion of Japan began, he was expected to kill an American invader. The difference between the beliefs forced on the population from the mid thirties to the changes of the post 1945 Government is hard to grasp.

Pages 92 through 101 describe the evolution of the Japanese Army and Navy he air forces; covering in some detail, the aircraft, training, and tactics.  It was no wonder the Japanese were able to sink Prince of Wales and Repulse. They had torpedoes that worked and made one hit using high altitude level bombing. (pg. 55) A discussion of the surreptitious building of the 18 inch gun “Super Battleships” follows, mentioning the several years lead time the Japanese achieved by anticipating the end of the London Naval Treaty.  It seemed the issues between the aviators and the “gun club” navy were similar on both sides of the Pacific.

Very fortunately, on December 22, 1941, Prime Minister Winston Churchill arrived in Hampton Roads. He remained, living in the White House, until January 15, 1942. The eight pages devoted to this visit, and the personal looks at the discussions and activities, which essentially outlined the strategy for the “Two Front” war, is worth the “price of admission” by itself.

From this point forward, the text outlines of how the Allies and U.S. reacted to the realities of the situation. Initially not well. The surprising ease with which the Japanese bombers sank the British capital ships and strategic result of the guns facing the wrong way at Singapore are gotchas that might well be the final question asked in the heat of the moment when completing any OP Order today. There are numerous other examples, fortunately, there were fast learners who took charge, but a price was paid. The following progression of timely actions, all covered by Toll in dramatic fashion, lead the reader on. The close relationship that grew between Churchill and Roosevelt setting the course for the hard years to follow was accomplished with mutual trust and give and take. The brilliance of Admiral Nimitz, and the oft told, but hard path of the code breakers at Pearl Harbor who overcame outright slander to present their findings to Nimitz in what has to be the most important staff briefing in history.

The Midway story has been told and retold. Toll does take another slice off the layer cake which is well worth reading, but the true value of this book is that the context of the battle is better established. Incidentally, this reviewer continues to believe the actions of the USS Nautilus (SS 168) were the key to the success at Midway. Toll obliquely references Nautilus on pages 415 and 427.

In summary, even readers who consider themselves students of the first six months of the war will come away with a better understanding and perspective of the background, and context of how close we came to losing.

Rear Admiral Gentz is on the Board of Directors of the Naval Historical Foundation.

Leave a Reply to Harold B. (Bud) Wien Cancel reply