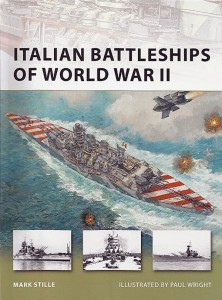 Mark Stille’s latest installment is a delightfully refreshing work far and above what its easy reading Osprey/Vanguard primer format suggests: you can’t judge a book by its cover! This work brings new or largely undiscovered material to the English-speaking world since most of the accounts on the topic of the Mediterranean naval theatre of the Second World War occur from the Royal Navy’s vantage point. That is, history is written by the victorious British which dismiss the Regia Marina as lousy and ignore their  massive strategic impact on the conflict. The other half of the problem is that all primary Italian documents were destroyed after the war creating great difficulties for historians wishing to study the conflict in a balanced fashion from each Navy’s perspective and form their own opinion. Furthermore, since Italy lost the war and had a very strong anti-fascist postwar sentiment, few efforts were made to document the Italian sailors stories from this period.

Premier Italian naval historian and author Erminio Bagnasco has lamented this in many of his works and has often cited that even a thorough research in his own native Italian language would suffer from these limitations. Therefore, primary sources detailing the topic from the Italian point of view are few and far between, mostly limited to the writings of Admiral Giuseppe Fioravanzo or Marc’Antonio Bragadin, and almost never translated into English. The Anglophone world to date has not been able to access enough information to form a properly informed opinion on the subject matter.

Mark Stille’s point is that while the Regia Marina never scored a tactical battle success, it never needed to score a single hit on an enemy vessel! Sinking British warships was superfluous and unnecessary because the mere sortie of Italian units, which contrary to popular opinion were employed aggressively and often, caused Allied convoys to scatter and thus become easy prey, greatly reducing the Allied ability to supply their destinations. In turn, because British units were diverted to pursue or escort against said Italian units, they were unable to intercept the Italian shipping and conquer the sea lanes that they themselves were being denied. That the Italians delivered 98% of Axis personnel and 90% of materiel while suffering nearly negligible losses speaks highly about their Navy. In brief, I feel Italian Battleships of World War II is exceptional because of author’s strategic objectivity.  Some minor errors do occur, but the effort to respect and represent the history as it occurred is largely intact.

As with Stille’s previous Osprey/Vanguard titles, the work focuses in order of each class of ship he wishes to document under the category set by the title, in this case Italian Battleships of the Second World War. The story is woven using the stories of each individual ship through its service life, starting with the reasons for its design, inception, technical details, modifications pr revisions, and the combat history. The author offers well researched analyses of political, tactical and strategic considerations which of course enhances the experience for the reader. Despite the book’s paltry 48 pages, the author delves into the reasons why the vessels were built that way and later modified, provides commentary on the external factors that led to their combat results, and offer little Easter eggs of pertinent, little known trivia that might make the reader smile, grunt or make facial expressions, thus driving his points home.  Kudos for providing details such as how many days each ship was out of action down to how many hits were suffered with their respective damaging during each of their actions. Also notable are the author’s brief, but pertinent comparisons and criticisms to comparable vessels in other navies when appropriate.

Another highlight of the Osprey/Vanguard type books is the presence of paintings and  photographs; this work will not disappoint. There are numerous paintings done by an artist whom Stille commissions using period photographs, and they are nicely done. In this respect, he used a highly acclaimed and esteemed book (by Ermino Bagnasco, an excellent source) for the camouflage and wartime appearance of Italian vessels, whose flavor and vigor are well captured by the artist. The photographs in Stille’s book are also mostly of good to excellent quality though a handful appear to be digitally enhanced or “pixelized” by a computer, perhaps due to their deteriorated condition. I have been informed by the author that all of the images therein were sourced from the Naval History and Heritage Command. By the author’s own admission, the only photographs that are missing are photos of the Italian vessels during the war proper, few of which can be found without risking an infringement of copyright law given the logistics of communicating in Italian. Still, the range, scope and quality of the photographs makes this book worth buying just for that reason.

The only glitch that I could detect in the illustrations is on the cover with the Roma being attacked with the German flying bombs. Italian battleships had a white and red set of stripes on the fantail and forecastle due to operating in home waters which usually conferred air superiority given their proximity to the Italian peninsula’s airbases. It has come to my attention that the Roma had these stripes painted only on the forward part of that particular ship which differed from the other Littorio class battleships.

Another small inconsistency I noticed was that the Italian navy’s weapon performance was described as suffering high dispersion rate with poor accuracy in some areas, with the reasons why being well described, but overall being “comparable to other navies.” My own exploration of Italian sources such as Erminio Bagnasco’s Le Armi delle Navi Italiane Nella Seconda Guerra Mondiale (The Weapons of the Italian Ships in the Second World War) mentions these problems as being severe and decidedly inferior to what the rest of the world was accomplishing even as of the First World War, never mind the Second. One other incorrect small detail where the author might have erred was that he mentioned fuel as being a limiting factor to fleet sorties after 1942. While Mussolini verbalized this as a chronic problem to Hitler whom he deceived many times, there are sources such as Fabio Andriola’s Mussolini Nemico Segreto di Hitler (Mussolini, Secret Enemy of Hitler) that describes, amongst other things how Italy had secretly stockpiled jaw dropping amounts of strategic materials without any purpose or attempt to use them whilst publicly declaring a great shortage thereof. The data shows that the fuel reserves at La Spezia at the time of Italian surrender were ludicrously full and that this alone would not have been a good reason for the Ita lian fleet to stop operations after mid-1942.

These are all minor foibles that any reader can easily overlook given the overall charm of this well researched synopsis of Italian battleships. It offers new, or at least largely unknown information in an easy reading format that will interest any warship buff or naval historian wishing to spend an evening or two digesting something a little different. The author shows a devoted, respectful approach to painstaking research, while the images both and photos present pleasing eye candy for any battleship buff. Its presence on your shelf will not be in vain, as the photographs and information make for a good reference that will be used time and again. I thoroughly enjoyed and highly recommend Mark Stille’s Italian Battleships of World War II.