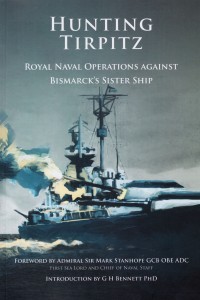 Hunting Tirpitz is a new work in a series of books recently released by the University of Plymouth Press. The series is entitled Britannia Naval Histories of World War II and comprises declassified government documents describing various naval operations during World War II. The German Kriegsmarine deployed the battleship Tirpitz to the northern reaches of Norway in 1942 to serve as both a deterrent to an invasion of Norway and to threaten the convoy routes to Russia’s northern ports. Often overshadowed by her sister ship Bismarck, Tirpitz caused great consternation among British naval planners and the book provides primary source documents on the four principal efforts launched to de-fang Hitler’s most powerful battleship.

The book is cleanly divided into six parts with three parts each covering a specific operation launched against Tirpitz. The remaining three parts comprise the Naval Staff History of the attacks and their aftermath, survivors’ accounts and photographs. The three operations involved assaults on the Normandie drydock at St. Nazaire (Operation Chariot), the attack by X-craft midget submarines (Operation Source) and the Fleet Air Arm (Operation Tungsten) from 1942 to 1944.

Apart from the personal accounts in Part V, the writing is clinical and devoid of emotion. This is chiefly due to the declassified reports being debriefing documents describing the planning, objective, actions on the objective and results of each operation. The reports were updated in the post-war period and provide assessments and conclusions that would have been impossible to reach without access to German archival materials and witnesses.

One particular strongpoint of the work is the vast amount of hand drawings, renderings, cutaways and maps provided. Illustrated damage reports done at the time of the operation and their comparison to post-war findings are especially helpful to the reader in understanding the fog of war surrounding the operations against Tirpitz. For example, Operation Tungsten rendered the Tirpitz combat ineffective in April 1944 due to damage inflicted on her hull and internal machinery by the Fleet Air Arm’s bombing strikes. Unaware of these facts, Allied war planners ordered a subsequent attack by Bomber Command which finally capsized the once mighty ship on November 12, 1944.

Much of the book’s material is composed of various indices listing ships used in a particular operation, their crew, the final disposition of the vessel, etc. and are not useful to the casual reader. The information, though, will prove invaluable to researchers looking for primary source material on the Tirpitz. Overall, the book’s chief usefulness is as a resource for academics, writers, etc. and not as a weekend beach read.

David Kronenfeld is a corporate attorney and maintains the blog www.shipwreckology.com.