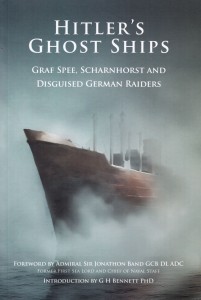 This volume is one of the first in a new series of books on Royal Navy engagements with the Axis Powers during World War II. Battle Summaries from the archives Britannia Royal Naval College’s Library have never been published in a monographic format. These are documents once stamped “Secret,” previously restricted, classified reports and plans drawn up by serving Royal Navy officers during and immediately after the war. The books in the series also contain Germany’s recorded view of Kriegsmarine actions against the British, with Hitler’s comments (Der Fuehrer Conferences) as they were typed and filed at the time. Hitler’s Ghost Ships demonstrate how the Royal Navy dealt with the threat of German raiders more than 70 years ago.

The editor of the series, G. H. (Harry) Bennett, an Associate Professor (Reader) in History at the University of Plymouth, Devon, UK, holds a doctorate from the University of Leicester (1992) and serves as a trustee of the museum and collections at Britannia Royal Naval College in Plymouth. He has authored more than a dozen books on military, maritime, and diplomatic history. The “Foreword” to the current volume is by Admiral Sir Jonathon Band, former First Sea Lord and Chief of Naval Staff. Bennett’s “Introduction” guides the reader through a level of detail that does not appear in post-war accounts, putting the Battle Summaries in context. These summaries, he states, “constituted the first draft of the history of the war at sea” (p. 21).

While the war against British commerce was the primary task of the German submarines, which sought to strangle Britain’s imports of food and war materials, the German surface fleet’s war mission included keeping the Royal Navy out of the Baltic Sea and other limited actions. However, disguised German auxiliary cruisers, flying the flags of neutral nations, could approach British merchant vessels without difficulty. Archival documents confirm that the building or refitting the disguised Kriegsmarine ships was a difficult task for German dockyard workers and crews. This volume recounts the stories of a number of raiders in three Battle Summaries on the German Navy’s tactics of disguise to isolate the British Isles; two narratives focus on conflicts with well-known ships and a third on lesser-known raiders or “Ghost Ships.” We learn that the Germans referred to their raiders by letters and the Royal Navy designated the German raiders by numbers, e.g., Atlantis was Raider C (German) and Ship 16 (British), which sank 22 British vessels. Some stories are well-known but the accompanying maps and appendices provide the reader with significant, often interesting and compelling, information.

Battle Summary No. 26:  The Chase and Destruction of Graf Spee (The Battle of the River Plate, September to 13 December 1939 (pp. 24-108) six chapters, eight appendices (A-H), six plans, two figures, and 140 endnotes. Graf Spee sailed into the South Atlantic in September 1939 and sank nine British merchantmen in three months. Ultimately, eight Royal Navy groups hunted Graf Spee, inflicted serious damage, and forces the ship into port at Montevideo before it was scuttled by its own crew in the river estuary. This report includes information through September 1944. The appendices (pp. 81-108) document British forces in the South Atlantic at the outbreak of war, the River Plate battle, Admiral Harwood’s signals, events at Montevideo before the scuttling, and rounds and torpedoes fired.

Battle Summary No. 24:  The Sinking of the Scharnhorst (The Battle of the North Cape) 26 December 1943 (pp. 109-164) 17 parts, five appendices, six plans, six figures, and 63 endnotes. Scharnhorst and Gneisenau sortied operated together for much of the early portion of World War II, including sorties into the South Atlantic to attack British merchant shipping. Scharnhorst was sunk by HMS Duke of York and escorts.  Appendices (pp. 150-159) focus on the warships employed in the operation, cruiser actions, torpedo attacks, intelligence gained from 36 prisoners, and a chronology of battleship actions.

Battle Summary No. 13: Actions with Disguised Raiders, 1940-1942 (pp. 165-214) ten parts, four appendices eight plans, and 84 endnotes.  These deal with eight actions over 28 months in the South Atlantic and Indian Ocean. From the Atlantic, they report HMS Alcantara vs. a German raider (July 1940) and HMS Cararvon Castle vs. a German raider (December 1940); from the Indian Ocean HMS Leander vs. an Italian raider (February 1941); HMS Cornwall vs. the raider Voltaire (April-May 1941); HMS Cornwall vs. Raider 33 (May 1941); HMAS Sydney vs. the Kormoran (November 1941); and from the South Atlantic HMS Devonshire vs. Raider 30 (November 1941),  and HMS Dorsetshire vs. the submarine supply ship Python (December 1941). An unfruitful raider hunt is also documented. It is not always clear from the narratives which raiders were seen or engaged and/or sunk. Appendices (pp. 204-210) further inform us about the Alcantara, Cornwall, the cruise of the Kormoran, and Admiralty messages.

The book is printed on heavy, high-quality paper and the original Battle Summaries have been rekeyed in a very readable font. However, we are not informed if any editing or redaction of text has occurred. The endnote references include some publications more recent than the original reports and include citations to archival documents and newspaper accounts which provide a fuller context of the events being reported. The maps and plans are superbly drawn but sometimes reduced to a scale whereby a magnifying glass is needed to read the nearly illegible text (especially numbers). The volume might have been strengthened if the narratives had been accompanied by images of the ships being discussed and readers were informed as to the number of raiders Germany sent to sea or a tabulation of known Ghost Ships. We do learn that a total of 22 raiders and supply ships were sunk in 1941 and from Admiral Band’s “Foreword” (pp. 5-6) that raiders collectively sunk 129 ships of 800,611 tons (gross or net tonnage isn’t stated). Nonetheless, this is a significant new source of information helping us to understand critical naval actions versus Kriegsmarine raiders during the period 1929-1943. The action plans and informative appendices are especially valuable resources and the section of the Graf Spee is especially revealing. This volume would appear to be the beginning of an important new set of books on the Royal Navy in World War II.

Dr. Kolb is a Senior Program Officer with the National Endowment for the Humanities.