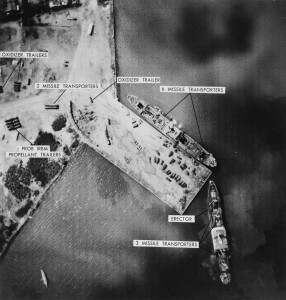 Aerial photo of the port of Mariel, Cuba showing missile equipment by the docks and on board freighters. NHHC photo USN 711212.

When Navy reconnaissance jets and U-2 spy planes confirmed the existence of Soviet nuclear missile bases under construction in Cuba, the United States demanded their removal and instituted a naval quarantine of the island.

The 13 days at the end of October 1962 came to be called the Cuban Missile Crisis and perhaps, in the history of the Cold War, is the closest the two adversaries came to armed hostilities. The military might possessed by the U.S., along with measured diplomacy, helped defuse the dangerous situation.

To celebrate this milestone event in the history of the Cold War, the Naval Historical Foundation has produced a video, “The Cuban Missile Crisis,” providing a brief overview of the events leading up to this historic confrontation and the steps taken to resolve it.

The video, produced by R.H. Rositzke and Associates, contains archival footage and images from those tense days, when President John F. Kennedy covertly assembled his national security team at the White House to decide on a course of action and plan its execution.

“What is clear from reading a history of this crisis is the overriding importance of a strong U.S. Navy,” said Bob Rositzke, who produced the video. “A naval blockade was the one means to peacefully remove the missiles but couldn’t have been accomplished without a credible naval force.”

The video captures the tension the world felt 50 years ago and should be informative and entertaining for those who lived through it, as well as young people to whom these events are now “history.”

The video has been installed in a mobile kiosk display, allowing it to be used in a number of venues. We invite you to watch it here: