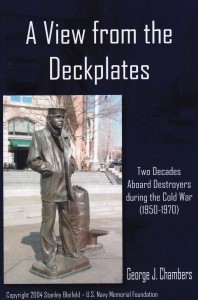 By George Chambers, Authorhouse, Bloomington, IN (2004).

If anyone has ever wanted to get the experience of serving on destroyers for twenty years, Senior Chief Fire Control Technician George Chambers has provided the answer. His love of destroyers is evident in his descriptions and table of different classes from pre-World War I DD1 up to DDG 113 still under construction.  As detailed as this table is, it would have been helpful to include the date of construction, to allow correlation with events like World War II. His devotion to being a chief includes the CPO Creed , read after initiation of all new chiefs.  The book rivals the old Blue Jacket Manual with clear descriptions of the usual nautical phrases and necessary abbreviations without overdoing it.

He describes the joyful moments of excitement such as successful missile competition or setting a trap to kill MiGs in North Korea, as well as the boredom of being at sea in stormy waters for months on a radar picket ship. The details that only a Sailor in WestPac can know like Mary Soo side cleaners in Hong Kong, bring back memories of leaving much food on your food tray or plate for Mary Soo. You would think that school command or destroyer tender duty would be less interesting than ASW or plane guard on a tin can, but the Senior Chief describes challenges met and overcome there as well.  His descriptions of the various ports of call from the Mediterranean to Western Pacific and all between are a nice travelog for those readers who may never visit them.

It would have been easy for this book to stoop to the common junior officer jokes, but he presented those events in good taste and not disrespectfully. We have all seen the bridge officers scramble to see if the other ship CO is senior to our CO for right of way underway.

He includes notes of Cold War events along with his personal career narrative to fulfill the promised Cold War relevance of the 1950 to1970 tin can service time.  Interactions with the wardroom, from Commanding Officers and Executive Officer down to Division and junior Officers are typical. An unusual touch that is largely unknown is the reproduction of eight New Year deck log entry poems.

The only annoying thing about the book was the 14 typos I noted, but that is the fault of the editors.

Being a retired MCPO with 25 years on tin cans during the same time period, I certainly enjoyed the book and the author’s devotion to the Navy, destroyers and the CPO brotherhood.  I am certain land lubbers will appreciate the same virtues and at the end of the book, feel as if they really have an understanding of destroyer duty during the Cold War.

Jim Bussert has published over 200 articles in various professional journals since 1973. His main interest has been in Chinese naval technology since 1990 and he co-authored Peoples Liberation Army Navy (PLAN) Combat Systems Technology 1949-2010 with Dr.Bruce Elleman from the NWC Newport, published by Naval Institute Press in 2010.