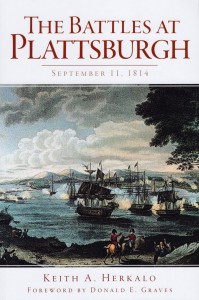 Of all largely ignored major military operations in what is often called America’s “forgotten war,” the Lake Champlain campaign of 1814 ranks in first place. Self-styled “amateur historian” Keith Herkalo brings enthusiasm and diligence to another inquiry into the battles around Plattsburgh, New York. During 1812 and 1813 the British primarily resorted to defensive tactics in Canada while they concentrated on the defeat of Napoleon Bonaparte.  That task accomplished, they shifted their focus to “offensive operations on the [American] Enemy’s Frontier” from Lake Huron to the Maine coast and with coastal raids from the Chesapeake Bay to New Orleans. Particular emphasis focused on securing domination of Lakes Ontario, Erie and Champlain. Regarding the latter, His Majesty’s Government desired securing possession of the lake’s littoral in order to protect Lower Canada (modern Quebec) from future campaigns utilizing this waterborne sally port between the Hudson Valley and the St. Lawrence Valley.

Herkalo seeks to supplement the work of Professor Allan Everest’s The War of 1812 in the Champlain Valley (1981) by expanding historical sources, by utilizing familiarity with the geography on which the land and naval actions occurred, and by correcting numerous historical inaccuracies that have been repeated too often over the past two centuries. In most of these objectives he is highly successful. Particularly important are his utilization of the journal of Eleazer Williams, whose Native American scouts kept close tabs on British operations, and the correspondence of Major General Frederick Robinson, commander of the one of the divisions of British troops in the campaign.

At the core of Herkalo’s thesis is the argument that the spring of 1814 brought “the withering of a faulty American military plan and the initiation of a masterfully crafted British plan.” Certainly one can criticize in hindsight Secretary of War John Armstrong’s decision to withdraw most of the American soldiers from Plattsburgh to defend the critical American naval base of Sackets Harbor on Lake Ontario. Governor-General Sir George Prevost’s decision to concentrate on Lake Champlain has less to do with its priority than to the logistical situation which he confronted. On the other hand, Commodore Sir James Lucas Yeo concentrated Royal Navy resources on Lake Ontario while Prevost focused British Army troops on the Lake Champlain corridor. Consequently, Yeo hoarded shipwrights and supplies and neglected the construction of HMS Confiance so that it was just completed and ineffectively manned on the eve of the Plattsburgh battles. This masterfully crafted operation constitutes a case study in inter-service non-cooperation. It contrasts with the army-navy cooperation exhibited by U.S. Brigadier General Alexander Macomb and Master Commandant Thomas Macdonough at Plattsburgh. This campaign is one of several instances where the British government diverted sailors and soldiers rather than concentrating force at the point of decision.

The Battles at Plattsburgh makes little contribution concerning the critical and decisive naval engagement in Plattsburgh Bay that has not been made before. Most of the additions involve a detailed discussion of the land campaign in which Herkalo makes important additions to our understanding of the tactics employed by both sides.  However, he does not discuss the controversy over whether General Prevost was supposed to coordinate his attack with that of the Royal Navy nor does he review the strategic and diplomatic consequences of the engagements at Plattsburgh that led to the status quo ante bellum treaty that concluded the war just ten weeks later. The definitive work on the Lake Champlain campaign remains unwritten.

Dr. Skaggs is the author of books on War of 1812 naval commanders Thomas Macdonough (2003) and Oliver Hazard Perry (2006) published by the Naval Institute Press and of a forthcoming study of William Henry Harrison’s military career to be published by the Johns Hopkins University Press.