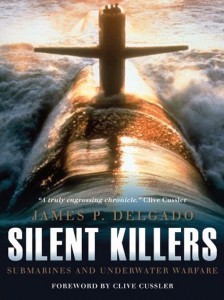 Dr. James P. Delgado, author of Silent Killers, is extremely well qualified to present the history of man’s desire to go beneath the sea, starting with the first attempts to breach treacherous waters to the present time of nuclear submarines. Delgado is the Executive Director of the Institute of Nautical Archeology, the world’s leading scientific organization dedicated to the study of shipwrecks and seafaring. Using historical research and copious illustrations, the author explains man’s attempt to get underwater and advance to use the submarine in warfare. This book follows submarines from their early development through the present where they are arguably the world’s ultimate naval weapon.

Delgado recreates the story of the submarine using eerie photographs of submarines at the bottom of the sea, from wooden, to iron, to steel hulls, and from hand-cranked to nuclear propulsion. He details submarines going from candle light to electricity, and from gunpowder “torpedoes” to nuclear-tipped missiles. Delgado illustrates early trial and error efforts to build submersibles and goes on to detail the new era of underwater warfare.

The concept of combat beneath the seas dates to the use of a semi-submersible “auto-mobile craft” introduced in the 16th century. A diving bell was used in the 18th century to recover items from shipwrecks. Robert Fulton, an American, became interested in the concept of a submarine, the Nautilus, in warfare. Fulton told the French government that submarines could break the naval power of its enemy – Britain.

The American Civil War found the Confederates, the weaker naval power, concentrating their technological efforts on a variety of weapons which included submarines and torpedoes. Ultimately they merged the two weapons into one. On the night of 17 February 1864, the H.L. Hunley, was the first submarine to sink an enemy ship using a “torpedo” when she exploded a charge against the wooden hull of the Union sloop-of-war Housatonic off of Charleston, South Carolina. Unfortunately, for the South, H.L. Hunley was lost with all hands.

We witness, in detail, how progress changed the course of maritime warfare forever. Because of Hunley’s “qualified” success, inventors worked on developing greater range and depth for submarines. In 1866, a new weapon was developed, a “locomotive torpedo” which was self-propelled underwater. The development of underwater weapons paralleled the submarine’s development for depth, speed, and navigation. The 20th century saw the rapid development of the submarine as a fighting weapon. In the global arms race, each successive submarine was larger, had more power, and was better armed.

Delgado observes how nations used their submarines. On 9 February 1915, Germany announced that its fleet would enforce a blockade of Britain’s “War Zone.” During World War II, German submarines again were offensive weapons in the Battle for the Atlantic. German Grossadmiral Karl Donitz employed U-Boats to form “wolf packs” and use night surface attacks against allied convoys. Of note, an action in May 1941 that contributed to the German defeat was the British removal in of an Enigma encoding machine from U-110, a German submarine that had been forced to surface.

In describing the evolution of various classes of submarines, Delgado includes mini-submarines and the arrival of nuclear propulsion in the form of USS Nautilus (SSN 574).

Throughout the course of the 20th century and now the 21st, submarines have changed the balance of world power, and will continue to do so for many years. This compelling history by one of the world’s preeminent naval experts is a timely reminder of the power of the “silent killers.”

Silent Killers is a handsome book, 8″x10″, with 264 pages including footnotes, sources, and a selected bibliography and index. The copious illustrations throughout the book are in both black and white as well as color with numerous diagrams. The text and illustrations are on heavy, glossy paper. This handsome book gives the reader a unique appreciation of this aspect of naval power.

Jan Churchill is the author of “First South Pole Landing: The Pilot’s Story.”