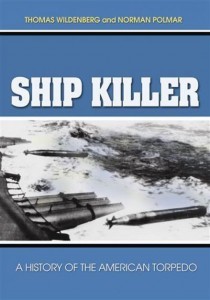 This is not a coffee table book. I thought I knew a lot about torpedoes, but this book proved me wrong. I was a Weapons Officer for two years and had experience in several generations of torpedoes (steam, electric and mono-propellant fuel). I have launched many exercise torpedoes and one war-shot torpedo during tours leading to and while in Command of a Fast Attack Nuclear Powered Submarine during the Cold War. Despite this experience I learned much from this book. This book provides a history of the American torpedo, including air dropped and surface fired torpedoes. Other nations’ torpedoes are discussed when they influenced the development and use of the American torpedo.

Norman Polmar told me that both he and his co-author did their own technical work. But his coauthor, Thomas Wildenberg, was the wizard that found the original technical manuals so they could provide a straight forward and accurate explanation of how torpedoes worked and the procedures for their use.

This book provides much more than just the new technology required for the development of air, surface and submarine launched torpedoes. It provides an insightful analysis of the political and tactical reasons that drove the direction of torpedo development and the technology and cost issues that forced us to produce the torpedoes we actually used.

The unintended consequences of trying to make these weapons more effective are enlightening. The most notable is the infamous problems with the Mark 14 torpedo during World War II. Many books have excellent, detailed explanations of these problems and their solutions. John Wayne’s 1951 movie Operation Pacific provided an entertaining version. I believe this book provides the clearest, most concise description of the subject that includes a fair portrayal of the infighting, politics and technology that created and eventually fixed the problems. Polmar says their goal was to tell this story in one half the current length, but alas this fabled “word smith” couldn’t cover this complex subject in a shorter version.

The analysis of torpedo effectiveness, or lack thereof, in combat and the consequence it had on the morale and tactics of the combatants is fascinating. An analysis of what might have changed if the Mark 14 torpedo problems had been solved earlier in World War II is sobering.

The authors’ analysis of Cold-War torpedoes is based on their perceived effectiveness in combat and the effects it had in the political-military arena. There is an interesting discussion of the need for small nuclear warheads against advanced Soviet submarines because of their large size, many compartments, double hull construction and most interesting the possible deployment of effective counter measures. These warheads are described as Sub-Kiloton Insertable Nuclear Components for torpedoes and would have had a more relaxed release authority than standard nuclear weapons. The stir this caused in Washington is classic Norman Polmar and a must read.

The book ends with a discussion of how future conflicts at sea could be influenced by torpedoes, and anti-ship cruise and ballistic missiles.

After commanding Guardfish (SSN 612) Captain Bryant was a Deputy Commander of Submarine Squadron 11 before being assigned to the Political Military Division of the Navy Staff.