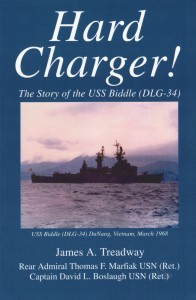 USS Biddle (DLG later CG 34) had a colorful and illustrious career. The last of nine Belknap- class cruisers, she was the fourth U.S. warship to carry the name. She was delivered to the U.S. Navy by the Bath Iron Works in Bath, Maine on 10 January 1967, commissioned 21 January 1967 and decommissioned 30 November 1993. As with any warship their “real” career begins when she is introduced to the reason of her existence, WAR! As aptly described in the book, The Biddle began her “real” career during the early years of the “hot” war in Vietnam, and continued into the remaining years of the Cold War. The U.S. Navy was on the front line of that war and the Biddle was riding that line. The historiography and perspective of the book was that of the eyewitnesses Biddle plankowner James A. Treadway, a former Data Systems Technician and Thomas F. Marfiak, a retired rear admiral, augmented by a well-qualified and sometimes colorful cast of “characters” that either served in USS Biddle, another Belknap class cruiser, or were involved with the technological development of the class and its systems.

Each of the chapters were very comprehensive in the technical aspects of the ship’s operation. As anyone who ever served on a ship especially a warship, can attribute, from the lay of the keel to the final decommissioning and/or her death, they are a living entity. Each contributor clearly presented that picture with an obvious knowledge of their respective subject. Through conceptual views of the technology that made the Biddle tick including the Sailors, they described how she earned “live” status and the right to be called “she” instead of “it.” Major “foul ups” that occurred were also presented, and the people and chronology of the attempts to correct them were colorfully presented with personal notes and touches; that would often put a smile on my face not only from the occasional humorous perspective but, also in recognition of honesty.

The contributors and editors appear to keep the story and each chapter in perspective for the most part except for an occasional ramble. I appreciated that the names of the responsible person was often included for credit of a development or the resolution of an issue. I do feel strongly however, that the chapter order could have been better arranged.  Beginning the book with the history of the general technological developments deferred getting to “USS Biddle” and her life as expressed in the title.  I read the book twice. The first time as is and the second time I began with Chapter 5 then 6, 3, 4, 2, 1, 8, 9, 7, 10, 11… I found that it flowed much better and tended to better put the technical information in perspective hence, kept my interest and minimized confusion.  From the laying of the keel to the death of a ship is a maturing process and would be better described that way. I also recommend a few pictures of the old computer systems in their spaces, floor plans, radar dishes, etc. to provide a visual comparative perspective to today’s technology to the younger readers.

On that note I do highly recommend the book to both those interested in ships and naval technology history in spite of the organizational issues.