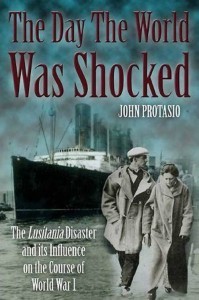 The author has crafted a well-written book that covers the sinking of the British flagged passenger liner Lusitania on 7 May 1914, by the German submarine U-20. The book is divided into three sections that consider 1) the events leading up to the sinking and its aftermath; 2) the world’s reaction to the sinking; and 3) an examination of myths concerning the sinking.

The story is told in a straight forward manner. We learn of the history of the Lusitania and who were some of the individuals who sailed on her during her last voyage. The manner in which the encounter between Lusitania and U-20 developed, that resulted in U-20 torpedoing Lusitania, is detailed by the author. The sinking of the Lusitania is then examined to determine why a minority of the passengers and crew survived, only 761 of the 1,959 who were on board.

The account of the sinking is followed by a discussion of the responses of various segments of American, German, and British societies to the event and the resulting international political consequences. Particular emphasis is upon the immediate and long term effect the sinking of the Lusitania had on American policy makers. Missing from the discussion is any analysis of the effect the sinking had on trans-Atlantic travel by United States citizens for the remainder of the war. An overview is provided of testimony given at the coroner’s inquest at Kinsale, Ireland, and at the British Board of Trade investigation held in the Wreck Commissioner’s Court in London concerning the sinking of Lusitania. The testimony given at both hearings is of a ship’s captain wedded to peace time operations who did not consider that a submarine would sink his ship without warning. It was also the failure of the Royal Navy to communicate clearly to Lusitania that a German submarine was presently engaged in sinking ships within the area Lusitania would be transiting.

The author does an excellent job presenting and dissecting various myths and conspiracy stories concerning Lusitania. Among those investigated are that she was equipped with deck guns, two torpedoes struck her, she sank because contraband munitions on board exploded, she was carrying Canadian troops, and Churchill set her up to be sunk to draw the United States into the war. Each of these contentions is examined and refuted using archival materials and reports of divers who have visited her final resting place.

The book, while it breaks no new ground in the study of the sinking of Lusitania, does draw into one volume all of the recent scholarship about this ship. It is a good introduction into the life and times of Lusitania and the effect the sinking of the ship had on American opinion. The book is well worth reading by anyone interested in World War I naval warfare.

Charles H Bogart is a frequent contributor to Naval History Book Reviews and was named a 2011 Naval Historical Foundation Volunteer of the Year.