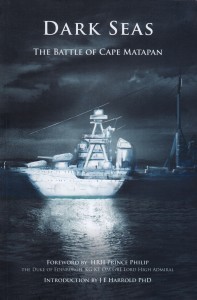 Dark Seas is a reprint of a British Admiralty Battle Summary monograph originally published in 1950 intended for the private use of serving officers (B.R. 1736(35) The Battle of Cape Matapan). As a summary, it eschewed any examination of the broader questions of strategy and policy and strictly aimed to provide a factual retelling of the action off Matapan (28 March 1941) which saw elements of the British Mediterranean Fleet engage and defeat an Italian naval force with the latter suffering the loss of three cruisers and two destroyers for the price of but a single British aircraft. Dr Jane Harrold of the Britannia Royal Naval College and the University of Plymouth provides a useful introduction to the work placing it in its broader context along with an updated bibliography to assist the reader desirous of knowing more. This is helpful as the Battle Summary is just that and not a work long on explanation or even singing the praises of individual officers who remain largely unidentified save for the Flag Officers present and commanding during the engagement.

In an academic work, such omissions would be striking, but the strength of the Battle Summary is that it offers an unvarnished assessment of the action with events told sequentially and by phases. This allowed officers to use the accompanying plans and signals to appreciate the battle in the manner that Admiral Sir Andrew Cunningham and Vice Admiral Henry Pridham-Wippell would have and facilitated its replaying at the tactical table. To this reviewer, the value of the Battle Summary is not that it is a definitive treatment of the Matapan action—it is not, but rather for the light it sheds on the evolution of British tactical doctrine from the Battle of Jutland in 1916.

As with Jutland, signals intelligence first cued Cunningham that a forthcoming operation was to be expected by an enemy force, though its exact nature remained opaque. When Pridham-Wippell’s scouting force established contact with a superior Italian formation, he fell back upon the British battlefleet in a move that Vice Admiral Sir David Beatty would have recognized. Yet, when the Italian force withdrew respecting the likelihood of British air cover, the Vice Admiral Light Forces (Pridham-Wippell) reversed course to maintain touch with the enemy indicating that one valuable lesson of Jutland had been learned.

Cunningham was certainly better served by the scouting and reconnaissance forces available to him than Admiral Jellicoe had been at the earlier battle, but for that, problems still remained. Discerning classes of enemy warships and friend from foe were certainly two, but the continuing problems of establishing the relative position in sighting reports and working to a common time across fleet units made it difficult for Cunningham to appreciate the true situation until actual contact was made. Cunningham also benefited from the radar sets present in several of his ships something Admiral Iachino, his opposite number, lacked. This provided a crucial advantage in locating an enemy force lying outside visual range in the nighttime engagement that he willingly accepted. This, too, was another lesson of Jutland for opportunities must be accepted as they come and not as desired. Royal Navy heavy ships now expected to fight at night and possessed the wherewithal in searchlight control, starshell illumination and developing the maximum fires in the briefest of times such actions usually were.

Still, if the action was one-sided it was also incomplete for the primary objective Cunningham sought, the destruction of the enemy battlefleet, eluded him. Matapan can be seen as a transitional battle reflecting the shifting value of carrier aviation relative to the battlefleet. Though ending as a surface gun action, it was the Fleet Air Arm’s strike on the Italian battleship Vittorio Veneto which led to a significant loss of speed that allowed the British battlefleet to close the range as accompanying Italian cruisers had to conform to the crippled flagship’s course and speed. Much the same would occur yet shortly again during the Bismarck chase though German gunnery was of an order of magnitude superior to that evidenced by the Italians at Matapan.

The reissue of the Battle Summary as Dark Seas is welcomed as it allows a greater audience to read this first draft of history, though foregoing the original Index and fold out plans is regretted. Likewise, the original footnotes now appear as endnotes.

If the reader approaches Dark Seas as the factual narrative that it is and supplements this monograph by reading the later works appearing, such as the appropriate Naval Staff History, a strong sense of the tactical and operational lessons codified in the immediate post-Second World War Royal Navy can be discerned.

Dr Joseph Moretz is with the British Commission for Military History.