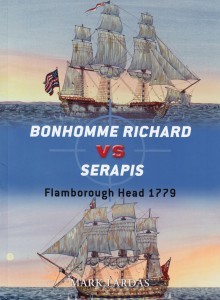 This is another well-crafted Osprey book. The author has combined text and illustrations to tell a well-rounded story of the naval action that took place in the North Sea off Flamborough Head on September 23, 1779. While most Americans know this action simply as a ship to ship engagement between the American Bonhomme Richard and the Royal Navy’s Serapis, this duel was but part of a larger naval action.

The author does more than tell the story of this ship-to-ship duel. The reader is given an introduction into merchant and warship design at the end of the 18th century. Bonhomme Richard had been built in 1765 as the French merchant ship Duc de Duras, while Serapis, built as a warship, had commissioned into the Royal Navy in May 1779. The author takes time to explain why this difference in design between the two ships influenced how the battle was fought. This is followed by a discussion of the two ships’ main armament that is complemented by a very nice illustration showing a half cross section of each warship emphasizing their gun armament. The author closes the section with an examination of the two ships complement: officer and enlisted, naval and marine.

Each of the two commanding officers, John Paul Jones and Richard Person, receives a nice concise biographical sketch that covers their life from birth to death. Both men suffered many setbacks in their profession as they tried to advance up the naval hierarchy ladder.  Interestingly, following his defeat, Person enjoyed a far better post battle professional life than did Jones, the winner.

The author devotes a number of pages to Jones’ problem in finding a command following his 1778 successful cruise on board Ranger in the Irish Sea before he gained command of Bonhomme Richard. We sail with Jones and his seven-ship squadron as it leaves France on August 14 for a raid against British shipping in the waters off Ireland and Great Britain. Unfortunately, for Jones, he is unable to impose his will on the squadron and these ships leave and return to the squadron at their Captain’s desire. The result is that Jones does not command a squadron sailing with a common purpose but rather is accompanied by six ships, which have their own agenda.

On November 23, Jones and his squadron, reduced to Bonhomme Richard (42 guns), Pallas (32), Vengeance (12), and Alliance (36) encounter off Flamborough Head a convoy of British ships returning from the Baltic loaded with naval stores. The convoy was escorted by Serapis (44) and Countess of Scarborough (20).   Person, commanding Serapis in the best of Royal Navy tradition, sailed to intercept Jones’ squadron while ordering the convoy to run for the shelter of the coastal batteries at Scarborough Castle.  Over the next four hours, Serapis, Pallas, Bonhomme Richard, and Countess of Scarborough would be locked in ship-to-ship combat.  In the end, the two British warships would be taken, but the heart of the convoy made it safely under the sheltering coastal defense batteries.

The author closes his account by giving an overview of three controversies that grew out of this engagement. What was the true number of casualties suffered by Bonhomme Richard and Serapis? What were the motives of Pierre Landais, commander of Alliance, in holding back from the battle and then misdirecting three broadsides into Bonhomme Richard at the conclusion of the fight?  Last of all, why was Jones stripped of his prize, Serapis?

The book closes with a bibliography and a guide to further reading for those seeking a fuller account of the battle. The book is a very nice introduction into one aspect of the naval war at sea during the American Revolutionary War.