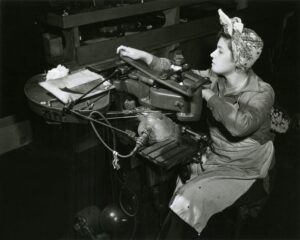 This fall, a new exhibition will open at the New York City based New-York Historical Society. The exhibition will be called WWII & NYC and is scheduled to open 5 October 2012. The exhibition will chronicle the most widespread and consequential conflict in history through the lens of New York City. Featuring more than 300 objects – including artifacts, paintings, maps, models, photographs, posters, film footage, music, radio broadcasts, and newly recorded eyewitness accounts – WWII & NYC will restore to memory New York’s crucial and multifaceted role in winning the war.

The U.S. Navy will be strongly represented in this upcoming exhibition, and will be loaning materials for display. Nautical themed items on display will included a photograph from 1941 showing over 100 British, Dutch and Norwegian merchant ships leaving New York Harbor to cross the Atlantic following the passage of the Lend-Lease bill, which enabled the United States to support the Allies by sending war materials to Europe and transformed the Harbor into the chief port; a painting by Harlem resident Jacob Lawrence from 1944, the year he became part of the first racially integrated ship in the armed forces, capturing the elegant symmetry of the ship’s control panel and was painted on board USS Sea Cloud; and a recruiting poster from 1944, featuring powerful women walking past the New York skyline, for the WAVES (Women Accepted for Voluntary Emergency Service), an all-female branch of the U.S. Reserve which would eventually train over 80,000 women for state-side service.