October marks 50 years since the tense standoff between the United States and Soviet Union that came to be known as the Cuban Missile Crisis. In the summer of 1962, the Soviets began moving nuclear missiles and nuclear-capable bombers to bases in Cuba, within easy striking distance of targets within the continental United States. Following the discovery of the missile sites in October by U2 reconnaissance flights, President John F. Kennedy, working in conjunction with a specially convened Executive Committee of the National Security Agency (the “EXCOMM”), made the decision to blockade the island of Cuba. Concerned that the word “blockade” would seem like a declaration of war against the Soviets and Cuba, the operation was instead termed a “quarantine.” The U.S. Navy was called into action, and rapidly deployed ships and aircraft throughout the Caribbean and Atlantic, to cut off Soviet shipping. The world waited in fear for the Soviet response to the quarantine. A wide range of possibilities were on on the table, including armed conflict on the seas, a U.S. invasion of Cuba, or even the armaggeddon of all-out nuclear war. At the height of the crisis, a series of communications were exchanged between Soviet leader Nikita Khrushchev and President Kennedy. The Soviets backed down, and the offensive nuclear weapons were removed from Cuba. The world breathed a sigh of relief, and the U.S. Navy effectively demonstrated the need for seapower in a time of crisis.

To commemorate this historic event, the Naval Historical Foundation has been working with the National Museum of the United States Navy to develop a set of three portable display panels telling the story of the “Thirteen Days” of the crisis. The nearly seven foot tall panels incorporate a chronology of the event, as well as U.S. Navy, CIA, and White House photography to tell the story. The Cuban Missile Crisis panels will make their debut at a special CNO Navy Birthday reception at the Navy Museum on 9 October, and then will be on display at the Navy Birthday celebration on 13 October in Tysons Corner, VA. Following these special events, the panels will be on display in the Navy Museum.

We want to give a special thanks to the USS Blandy Association, whose generous donation made this new mobile exhibit possible. 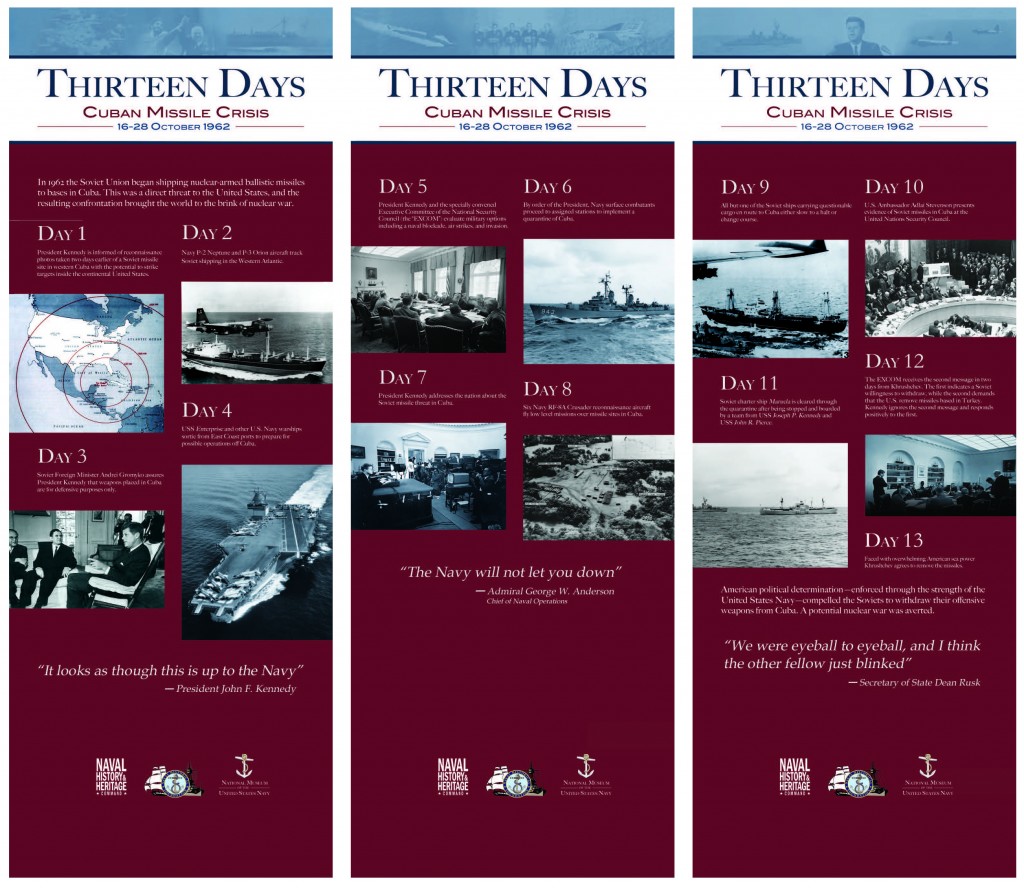