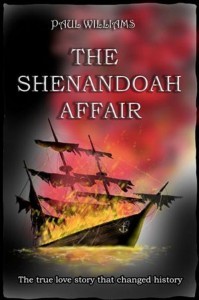 In the 2012 edition of The Shenandoah Affair, author Paul Williams provides lay historians with an expanded edition of his 1992 historical novel about the adventures of CSS Shenandoah in Australia. There are basically two themes to the work. The first considers the debate about whether or not Australia should provide aid to Shenandoah in matters of repairs to the vessel and in recruiting crew members that might constitute violations of neutrality laws. This section describes the machinations of the American Consul who tried to get the Australian authorities to declare the Confederate vessel a pirate ship and have it seized. Newspapers in Australia covered the ship’s arrival and took either a pro-CSA or pro-USA position. Like the newspapers, some Australians supported the CSA, while others the USA. The second focus of the novel features the illicit romance between the commanding officer of Shenandoah, Lieutenant-Commanding James Waddell, and the wife of Captain William Nichols, Lillias Nichols. Captain and Mrs. Nichols came from multiple generational Maine shipping families. The two lovers meet when Waddell ordered the Nichols’ Yankee trading vessel, Delphine, sunk. Waddell took Delphine’s crew and passengers, as well as cargo, on board Shenandoah. In a short time, Waddell and Lillias found themselves in a love affair that began aboard ship and continued while Shenandoah was repaired near Melbourne.

At the end of the book, the author provided a thirty page account of the true story of what occurred. Much of that information is identical to the novel and it is further supported by the quotes in the novel from the original source material adding credibility to the story. Reading the true story first allows the reader to follow the historical story much more thoroughly. Despite the research by the author, there is no bibliography provided in the book which would have been a wonderful addition for those interested in learning more about Shenandoah or other Confederate naval officers and adventures.

This historical novel is probably better described as a romance as it spends about half of its pages with James and Lilli’s ill-fated romance. The love making scenes between the two provide an intimate portrayal of their affair.  The author described Nichols as an abusive drunkard, although it is unclear whether or not that is accurate, but it helped the storyline.

Williams added several fictional characters to the novel, but two of them did not bring an added dimension to the work. The first was Lieutenant Van Doorn, a Confederate naval officer who willingly turned against his captain and crew in order to enhance his own wealth and prestige.  Reprehensible at best, Van Doorn attacked Mrs. Nichols on multiple occasions; however, she never told anyone about his behavior, likely because that would interfere with the true story of what occurred in Australia. Another character, Madame Molyneaux, the owner of a hotel where Lilli stayed briefly, brought a little color to the novel, but like Van Doorn, was not necessary to the story.

Williams easily works nautical terms into the book often providing explanations of the terms without being overwhelming to those who are unfamiliar with the jargon or the customs of naval procedures. This is a wonderful book for those who enjoy mixing business with pleasure, as Waddell and Lilli succeeded in doing.

Dr. Ahmad is with Missouri University of Science and Technology at Rolla.