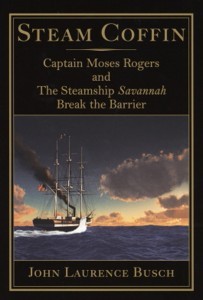 On Thursday June 17, 1819 lookouts at the Cape Clear Island semaphore station sent a report to the Royal Navy base at Cork, Ireland that a ship was afire off Cape Clear. A revenue cutter sent to investigate discovered not a vessel in distress, but the steamship Savannah completing the first steam-assisted crossing of the Atlantic Ocean.

Most with even casual interest in maritime history have heard of Savannah. When pressed, many can add that they heard the ship completed only one voyage, that it was an economic failure, and that it was converted back to a sailing vessel upon its return to the United States.

As John Laurence Busch shows in his new book, Steam Coffin: Captain Moses Rogers and the Steamship Savannah Break the Barrier, while those three facts are correct, they create a misleading image of Savannah and its accomplishments and overstate its failings.

“Steam Coffin,” a biography of Savannah, is also a biography of the man behind its construction – Moses Rogers. It is also a study of the early years of steam navigation. Busch places Savannah and Rogers in their context during the period when the steam engine was emerging as a means of steam propulsion.

Busch reveals Rogers as one of the early steam pioneers, but not as a steamship or steamboat developer. Rogers was a captain, one of the first to specialize in commanding steamboats. After learning his trade with the Steamship Monopoly established by Fulton and Livingston in New York, Rogers went on to skipper additional steamboats. Each new command brought him further south on the American Atlantic coast, until he ended up in Savannah, Georgia.

There he became part of a consortium determined to build the first steamship – a boat capable of crossing the Atlantic. The result was Savannah.

Busch examines the design and construction of the ship, describing the technical challenges that had to be overcome, as well as the psychological barriers the ship’s owners faced. He also explains how the ship was part of a new maritime paradigm -ships intended for the primary function of carrying passengers and mail with freight as a secondary cargo.

He also reveals the reasons that Savannah proved unsuccessful. Busch shows that the failure had less to do with any flaws in the ship itself or the economics of operating a steamship. Rather, the ship was launched during an economic downturn, when demand for transatlantic shipping was depressed. Then members of the consortium that owned the ship ran into financial difficulties independent of their investment in Savannah.

The bad economy checked attempts to sell Savannah in Europe on terms that would satisfy its owners need for capital. Their debts eventually forced a fire-sale auction of Savannah to an owner uninterested in steamships in order to satisfy creditors.

The books strengths are Busch’s research and his engaging writing style. Busch has meticulously examined all material relevant to Savannah and the early steamboat and steamship period that was available. You can tell Steam Coffin was a labor of love.

The only issues you might find with anything dealing with Savannah have more to do with interpretation than any factual error. (One example – Busch asserts that Savannah‘s mainmast and foremast trysails were unusual. While rare in 1815, gaff boomed trysails were common by 1821. Were they really unusual in 1817 when Savannah was built? It is a close call that could go either way.)

Busch’s text is not a dry recitation of facts. Busch tells an entertaining story in Steam Coffin. He has an ability to give life to the events and people he describes.

Its weakness is an excess of detail on peripheral issues. Steam Coffin meanders. Frequently Busch presents detailed examinations of people, events and items only incidentally related to Savannah. This steals momentum from the books main themes, and Busch occasionally missteps during these excursions. Tighter editing could have transformed what is a good book into an excellent one.

Despite problems, the strengths of Steam Coffin are such anyone whose interests lie in the early steam era or Savannah specifically will want to read it. Those seeking an interesting book on maritime history will find it entertaining and informative.