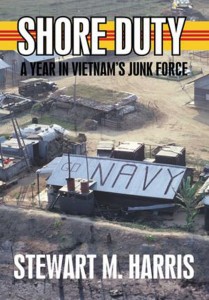 The role that the United States Navy played in the Vietnam Conflict is well known; but there are still gaps. While the importance of Naval Aviation, Special Warfare and Riverine Forces have been well-covered by both works of scholarly and popular history, there were other sailors involved in America’s then-longest war. Some of them were attached to the South Vietnamese Navy’s Junk Force; operating out of Coastal Group bases. They were vital to both the interdicting of maritime trade from North Vietnam; as well as prosecuting the war on the ground. Stewart Harris, a former U.S. Navy lieutenant who served as an advisor to one such unit, has ably filled one of these gaps with his well-researched and very readable account.

In 1968, after a four-year tour on destroyers spent hunting Soviet submarines, showing the flag around the Mediterranean and providing gunfire support off the coast of Vietnam, then-Lieutenant Harris was informed that instead of returning to civilian life, he had been extended one year. His time in the “blue-water” Navy was at an end. His eventual assignment, Coastal Group 16 had an ominous background; all three of his predecessors had been killed in action.

It was as a result of this high attrition rate that Coastal Group 16’s Junk Base had been abandoned for some time. As a result of the Tet Offensive and the arms deliveries and stockpiling that had made it possible, CG-16 was ordered back to their extremely vulnerable base.  Located near the Communist stronghold of Cape Batangan, as well as the village of My Lai (whose residents were unsurprisingly wary of any American forces) the Junk Base had no nearby friendly ground units to call on for assistance. Only Naval and Coast Guard vessels offshore, as well as air support could be counted on in case of attack. This was made clear to Harris early on when an ARVN platoon that had been sent to the base was wiped out shortly after it had left the wire on its first day of patrol.

With limited options open for assistance, Harris quickly realized that developing a good working condition with the Vietnamese, both in his command, as well as outside the wire would be vital.  In terms of the local residents, Harris and his men were frequent shoppers in the village market and often rescued fishermen from the unpredictable tidal flows. After contact with the ARVN platoon was lost, Harris was able to coordinate with the village’s de facto mayor for the return of the remains.  He was fortunate that his opposite (and technically the unit’s commander) Dia Uy (Lieutenant) Lang was an excellent officer. The junk force was something of an unloved stepchild to the Vietnamese Navy proper, and those assigned to it had no political connections. The enlisted men were initially barely trained and armed with twenty-year old carbines. (The lost ARVN platoon had actually been sent to give the base additional firepower.) Harris comments that he quickly threw in his lot with Lang, and was rewarded by an excellent working relationship and motivated enlisted force. This enlisted force would eventually excel at both ambushing Communist forces on land (which he believes the real value was), as well as interdicting the maritime traffic from the North (which he believes that the powered vessels employed by both the USN and SVN were eminently more suitable for). There were communication problems with some of those powered vessels, however. In one of the more amusing anecdotes from the book, Harris and his chief enlisted advisor took one of their junks to visit a destroyer operating off the coast. The underlying goal was to see what supplies they could entice out of the crew; but there was also the task of informing the ship’s captain and gunnery officer that despite their orders that the entire coast was to be considered a “live fire” zone, there was a friendly base smack dab in the middle of it. Harris relates in another story where a US Navy gunboat radioed the area coordinator (Harris) for permission to fire on a suspicious looking junk. As he was standing on that very junk, Harris denied the request.

This is a fine book overall. The major criticisms that I have are that the only map is not very detailed, and the volume lacks an index. (A helpful glossary of terms is included, however.) I recommend the book to anyone interested in the US Navy’s role in Vietnam, as well as the interaction between the “blue-water” and “brown-water” fleets.