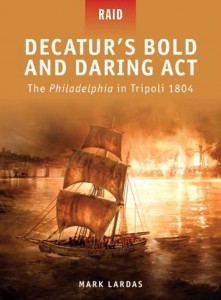 In the last decade the number of titles published which focus on the early years of the U.S. Navy – and more particular the Barbary Wars of the early 1800s – has seen a mild increase. Granted the number has yet to even broach the expanse of other periods of study such as the American Civil War. Yet as important as studies of the Civil War are to understanding the transitional effect it had on many facets of the country, the Barbary Wars were also an integral part of the development of America’s young Navy and its place in the landscape of the Atlantic community of the early Nineteenth Century. One central event which is included in all of these recent studies of the Barbary Wars is Stephen Decatur’s raid to burn the USS Philadelphia in Tripoli Harbor in 1804. That event is the focus of Osprey Publishing’s latest edition to their new Raid series. In Decatur’s Bold and Daring Act: The Philadelphia in Tripoli 1804 veteran Osprey author Mark Lardas gives an in depth look at the events that surrounded Decatur’s raid. As with all Osprey books – Decatur’s Bold and Daring Act fits within a specific formula of pages, wonderfully illustrated by original and historical images, and written in a clear straightforward manner which makes the work accessible to various audiences.

To understand the significance of Decatur’s raid, it is important to know why the Philadelphia was in Tripoli and the events that lead up to her capture. Lardas covers this in the first two chapters of the book. First by recounting the events which lead Captain William Bainbridge to run his ship aground while blockading the harbor, and then by looking at the relationship between the United States and the Barbary Coast Nations during the Early Republic and the state of the U.S. Mediterranean Squadron at in 1803. In ten pages the reader gets a well-rounded briefing of the situation in the Mediterranean Sea in the early 1800s, summarizing what other authors have spent entire monographs describing. The loss of the Philadelphia had a significant impact on the strength of the U.S. Squadron by leaving USS Constitution as the most powerful warship at the disposal of Commodore Edward Preble (whom the author repeatedly refers to as Edwin). Additionally, with the Philadelphia in Tripoli’s hands their fleet was suddenly on par with the American Squadron. Preble obviously concluded the Philadelphia must be either recaptured or destroyed. In reviewing the strategy for the raid, Lardas examines the many aspects which Preble faced. The condition of the Philadelphia bought him time as she would need significant repairs to make her seaworthy. However, those same conditions also made it impossible for a cutting out operation to return her to U.S. control. To put this in prospectus Lardas reviews what went into a cutting out operation in the 1800s, and the trouble a raiding party would encounter in trying to sail the ship out of Tripoli.

Lardas next turns his attention to analyzing the plan which was developed to burn the Philadelphia and how Stephen Decatur – a young lieutenant at the time – came to command the raid. Nothing was left to chance in order to accomplish the goals of this mission. Preble selection of Decatur and Lieutenant Charles Stewart to command the expedition provided the raid with officers with the proper mind set to accomplish the mission, putting success over efforts for personal glory. In addition, only volunteers were selected to crew the captured ketch which became the Intrepid into the harbor. What is occasionally overlooked in other accounts is the preparation that went into the raid. Every detail of the raid was planned out, from the supplies that would be needed to burn the ship, to training of the raiding parties aboard Constitution to insure familiarity. Additionally, original artwork showing exactly how the raiders would have been dressed provides another layer of understanding to events. Most contemporary artwork depicting the raid shows officers and crew dressed in their Western naval uniforms – not the clothing of Mediterranean sailors.

The raid itself is broken down into specific events for the night of February 16, 1804. After the storm that delayed the Intrepid‘s arrival in port, Lardas examines the raiders approach to the Philadelphia, boarding her and clearing the decks of the crew, the work of the incendiary parties, how the defenders reacted, and finally the raiders escape. Just how flammable a frigate during this period was is well described, highlighting why burning the Philadelphia was the proper course of action. This also demonstrates the importance which the planning played into the success of the night. From the inclusion of the password “Philadelphia” – which kept Decatur from injuring Midshipman Charles Morris on two occasions, to the addition of Salvatore Catalano as their pilot. Lardas concludes the chapter state of confusion as Intrepid sailed out of Tripoli, blending in with the other ketchs moving frantically about the harbor. Lardas summarizes by an analysis of the raid, and following events in the Barbary Wars through the end of Preble’s tenure as commodore. As he notes, “American success at Tripoli was not pre-ordained, despite the seeming ease with which it was accomplished.” (64) The summarization looks at how the specific orders Preble provide Decatur, along with Decatur’s ability to make critical decisions, and careful preparations removed the Philadelphia from Tripoli’s control permanently. Particularly without the loss of life on the part of the raiding party.

As with all Osprey books, Decatur’s Bold and Daring Act is well written and illustrated. Providing the reader, regardless of background, with a complete yet concise overview of events. The only misgivings to the work, aside for the Preble misnaming, are timeline used and the Further Reading chapter. Instead of a one page timeline, the publishers opted to disperse it throughout the book, often on pages that have little connection to the timeline highlighted. Under Further reading, the current literature on the Barbary Wars is completely overlooked, leaving the reader on their own to track down additional material. Despite these two items, the work itself is a nice addition to the literature of the Barbary Wars and to the bookshelf of any historian of the early U. S. Navy.

J.J. Ahern is an archivist with the University of Pennsylvania.