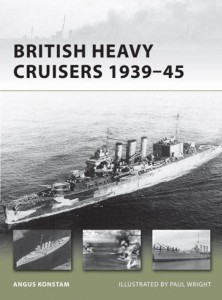 British Heavy Cruisers 1939-1945 is one of a series of books Osprey has published during the last 5-years covering various classes of warships. This book follows Osprey’s standard format of text, photos, and colored artist plates. The book is divided into four chapters: Design and Development, Heavy Cruiser Specifications, War Service History, and Weaponry and Radar.

The author has provided an excellent but brief account of the Royal Navy’s Kent, York, London, Norfolk, and Exeter Class 8-inch cruisers. He starts his discussion with the design, construction, and employment of the Hawkins 7.5-inch class cruisers of World War I. This is followed by an examination of the financial condition of Great Britain after World War I, the various naval arms limitation treaties of the 1920s and 30s, and the Admiralty concept of the number and types of cruisers it needed to ensure trade protection. He points out that unlike Japanese and American cruisers, which were designed to fight one another in formal battle, British cruisers were built around the concept of single ship operations to guard convoys and seek out raiders.

For each of the heavy cruiser classes, the author provides a nice short summary of the design considerations that shaped each class, their construction history, and prewar employment. A series of tables covering each class provides information on their size, machinery, speed, range, fuel oil capacity, and armor. This is then followed by a series of charts that traces the history of the changes in armament and radars that each ship underwent during the war. These changes were basically the removal of torpedo tubes and aircraft catapults and the addition of anti-aircraft guns and various radars.

The war history of each ship is brief but does cover the high points of their service. A reading of all of these histories gives one an understanding of how the Royal Navy employed its heavy cruisers during the war. The reviewer was amazed at the number of months each of these ships steamed by themselves on maritime patrol in the Indian and Atlantic Oceans.

The book closes with a sub-chapter in which the author provides his evaluation of the question did the Royal Navy’s heavy cruisers carry out the mission for which they were designed. He answers this positively, stating that their only defect was lack of effective anti-aircraft armament, a design requirement not considered when they were built.

The reviewer has two closing comments. There are some word processing errors that should have been caught, such as the armament chart for Hawkins is incomplete. The other is why include the Hawkins Class within this discussion of heavy cruisers; Hawkins and Effingham in 1939 carried 6-inch guns and Frobisher 7.5-inch guns.

Overall, this is a very nice book for those seeking an introductory look at British World War II heavy cruisers. The photos and artwork, particularly the cutaway drawing of Cornwall and the profile drawings of the different classes in various camouflage schemes within the book, give a nice visual clarification to the author’s words.