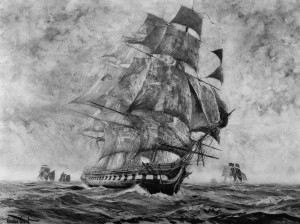 In 1906, Congress appropriated a sum of money not to exceed $100,000 for the repairs and restoration of Constitution. Despite expenditure of these funds, by 1924 the condition of the frigate was such that if she was not rebuilt, the Navy’s only two choices would be to break up the ship or let Constitution sink at the dock. The Secretary of the Navy, Curtis D. Wilbur, upon viewing the ship, appointed a Board of Inspection and Survey which after inspecting the ship, recommended on February 19, 1924 that Wilbur ask Congress for a $400,000 appropriation. “The Secretary, however, took the attitude that it would be a fine gesture on the part of the people of the country, and particularly the school children, if they contributed small donations for the purpose.”

Thus in November 1924, Wilbur appointed the Commandant of the First Naval District and Boston Navy Yard, Rear Admiral Louis de Steiguer to call a meeting of the heads of various patriotic societies to discuss raising repair funds through donations. With Congress authorizing the Navy to collect funds for Constitution per an omnibus bill passed on March 4, 1925, Wilbur formally appointed de Steiger to lead the National Save Old Ironsides campaign committee two days later.

As envisioned by the Secretary of the Navy, the committee’s initial fundraising ideas were to “popularize the campaign among the school children of the country and obtain from them in small sums the amount necessary,” and gain larger contributions from patriotic societies and organizations based on Secretary Wilbur’s general plan. The plan was to have the estimated 16,000,000 school children each contribute two and a half cents, which would, in theory, raise interests and awareness of their patriotic duties. Despite many school authorities, especially in urban school districts, opposing the notion of soliciting school kids for funds, the committee raised $154,000 through the pennies campaign – remarkable considering the logistics involved.

However, still well short of the mark, the committee eventually decided to sell lithographs of a Gordon Grant painting of Constitution for 25 cents and later 50 cents apiece. The initial problem with this effort was that the production of prints failed to meet demand. Eventually, production exceeded demand and the committee had a glut of prints to contend with. A sales force of 200 traveled the country seeking venues for sales. In the end, the print sales generated some $292,000.

In December 1926, the souvenir portion of the campaign commenced and by 1928 the first sales of souvenirs were made. The Committee sold souvenirs made from parts of Constitution that had been removed. Some items that were sold included pieces of wood and cordage, bookends, wood frames, gavel sets, plaques, anchors, cigarette boxes, miniature cannons, and bolts. The souvenir campaign raised a gross of $241,220.57 according to the calculations made on March 1, 1930.

Unfortunately, the costs of repairing the Constitution escalated as the five-year fundraising effort proceeded. In the end, Congress authorized an additional $300,000 to finish the repairs.

Writing the report in 1930, Rear Admiral Philip Andrews, who had relieved de Steiger as the committee chair in 1927, lamented that Wilbur had shunned de Steiger’s recommendation of assembling an Honorary Committee of representatives from banking and industry in favor of a committee consisting mostly of politicians. He also noted that Wilbur’s insistence on turning down large donations in favor of his principle of a broad based campaign certainly contributed to the fundraising shortfall at the end.

However, Andrews did note that the campaign, because of tremendous media support as well as help from Hollywood in the form of a feature film, did much to increase public awareness of the history of the ship and its role in contributing to the heritage of the United States Navy. That some 50 million Americans were exposed to the appeal in some form or fashion in an era that preceded television, is a remarkable testament to the efforts of many organizations that helped to raise the desired funds.

Following her repair, Constitution would become an even greater naval icon, as she would be towed to ports up and down the East and West Coasts during the early 1930s, to be visited by hundreds of thousands. Today she can be visited at the former Charlestown Navy Yard in Boston. On August 19, 2012, Constitution sailed under her own power for the first time since 1997, and only the second time since the 19th century, on the 200th anniversary of her victory over HMS Guerriere (read more here).