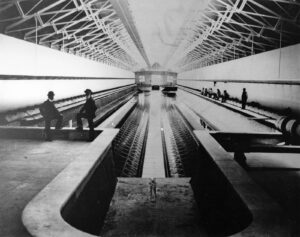 David Taylor Model Basin inside Building 70 at the Washington Navy Yard in 1898, the site of cutting edge naval research in the first part of the 20th century. NHHC photo NH 89718.

This conference examines the generation of expertise in naval contexts and trace how such developments helped shape the modern world. Expertise will be considered not only as knowledge but also as methods and practices central to the evolution of modern nation-states and empires.

In the search for useful knowledge and in answering the demands of global infrastructure, navies have not only pursued military aims, but have encouraged the formation of other areas of expertise, whether medical, technological, or bureaucratic. Recent research has identified navies as forerunners of modern scientific research, social disciplinary practices, and political economy for instance. This conference will explore such developments comparatively and consider their influence in the early modern and modern periods. By exploring how issues such as social welfare, professionalization and industrialization shaped and were shaped by naval institutions and innovations, this inter-disciplinary conference will link scholarship on naval infrastructure with research on the origins of the modern world

The major themes of this conference will address naval participation in four overlapping features of ‘modernity’: