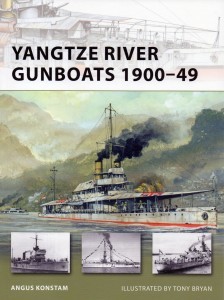 This small gem is one of Osprey’s comprehensive series of books on military history, units, and warriors. Despite the date in the book’s title, the history of western nations’ gunboats patrolling the Yangtze River goes back to June 1858, upon signature of the Treaty of Tientsin. This allowed British warships the right to visit any port in China, and to conduct “protective” and “punitive” actions in the event that British citizens were threatened or harmed. Similar agreements were negotiated by other western countries, following the establishment of the “Open Door” policy that called for unrestricted access for trade. Access to ocean ports had long been allowed, but these agreements opened up inland ports. The Yangtze River is more than 3,900 miles long – the longest river in Asia – and was the most important internal trade route. Navigation on the Yangtze had some limitations, however: about 1000 miles inland, a series of gorges and seasonal changes in river depth make navigation perilous. Only small warships with shallow draft and powerful engines could safely access the upper Yangtze. Initially, ships designed for operation on the Nile River were transferred to China, but eventually most such ships were specifically designed for this service, built in sections in England, and then shipped to China for assembly and commissioning. In addition to the US and UK, Japan, Germany, France, and Italy also maintained gunboats on the Yangtze.

In 1911, the Chinese Revolution took place, and the Manchu Dynasty was overthrown; the revolutionaries then split into the Nationalist and Communist factions and the country was effectively beset by civil war. Local warlords – essentially well-armed bandits – threatened the lives and property of western diplomats, merchants, and missionaries living in China. The importance of the protection afforded by these small warships and their crews would be hard to overstate. During World War I, the Japanese occupied several cities and regions in China; relations remained strained until Japan attacked again in 1937, effectively conquering most of China. Japan treated the Western countries’ gunboats as something less than neutral, bombing and sinking the USS Panay (“the Panay incident”), which soon after led to a withdrawal of US military and citizens from China. Following the end of World War II, only the British sent gunboats back to the Yangtze, but withdrew permanently in 1949, following an attack by Chinese Communists on the HMS Amethyst.

Konstam is an excellent writer and the colored drawings of gunboats by Tony Bryan are truly superlative. Numerous black-and-white photographs plus detailed descriptions of US and British gunboats by class add to the reader’s appreciation of the uniqueness of this aspect of naval power. I could have wished for a map or two, but the omission is a minor failing. For naval history buffs, this work is well worth reading and one that would grace any collector’s bookshelf.

Captain Jones is a frequent contributor to Naval History Book Reviews. He was recognized as a 2011 Naval Historical Foundation Volunteer of the Year for his efforts.