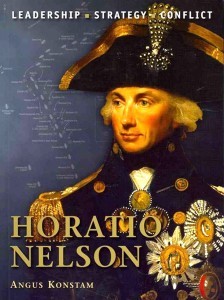 Angus Konstam’s description of Nelson’s advancement easily identifies why he was protected by his seniors and promoted by the Admiralty. He fought and won! Nevertheless this biography is too short to fully describe Nelson’s very complex personality. The highlights of his life and career are clearly described but without the depth to understand or explain the many complexities of his character or appreciate the magnitude of his skills.

The defects of Nelson’s personal character and conduct are reported: he was personally vain, a self-aggrandizing promoter grasping for personal honors and recognition, and a public adulterer. Less well covered were his attributes as a splendid and accomplished seaman and navigator who was unmatched in personal and organizational courage. In addition, Nelson invariably demonstrated great initiative, and was unflinchingly aggressive in combat. Those qualities that made him admired, beloved and almost adored by his subordinates – all the way down to the hands in the lower decks – are not well developed because to do so would require more pages than Kostam has available in this brief volume. How he generated such adoration among his Captains is merely touched upon and in this biography one does not get an appreciation of the depth of his personal magnetism and professional skills that were the basis for his success and reputation.

On the other hand Nelson’s major actions are not only completely and clearly described but the accompanying diagrams by Peter Dennis of the dispositions and maneuvers at Cape St Vincent, the Nile, Copenhagen and Trafalgar are without parallel. These alone are worth the modest price of the volume. Other excellent images, several modern illustrations of various battle scenes, other selections of art from the nineteenth century, flesh out this handsome volume.

The final contribution from Konstam’s work is a list of 37 books on Nelson or the battles in which he fought. No matter how many of these volumes one might have on the shelf, this small volume is a valuable and pleasant addition to any marine historian’s library.

Rear Admiral Holland is the Vice President of the Naval Historical Foundation.