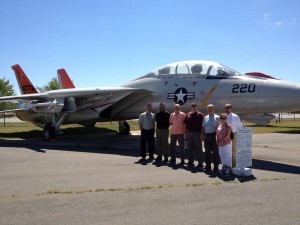 This group of STEM-H teachers were the first to undergo training on aviation, surface, and subsurface aspects of the U.S. Navy. While the teachers spent much of their time hard at work on lesson plans in the Cold War Gallery, at the Washington Navy Yard, they also spent a considerable amount of time on the road, getting a firsthand look at the Navy in action. Led by the program’s director, NHF’s Captain John Paulson, USN (Ret) the team made a trip to Naval Air Station Patuxent River, where they were able to tour the control tower and see the new F-35 Joint Strike Fighter in the air. They also had an opportunity to see machine shops with cutting edge 3D printers, and to visit the wind tunnel and talk to engineers in a variety of fields. The following day, they trekked down to Naval Station Norfolk, where they toured the guided missile destroyer USS Barry (DDG 52). Of particular interest to the educators was the destroyer’s AEGIS radar combat system, a marvel of Cold War technology. We’ve got photos of their trips on our Facebook page.

The end result of the two week program was a series of sophisticated lesson plans developed individually by each teacher. The plans will incorporate the history and science of the Navy during the Cold War, to teach STEM concepts (Science, Technology, Engineering, and Math) to high school and middle school students. The four teachers came up with an exciting mix of topics, including:

Over the next few weeks, NHF will work diligently to bring these new lesson plans to life on the Education Page of the Cold War Gallery website, found at www.usnavymuseum.org. We’ll be including Cold War photography and film, as well as imagery of the exhibits in the Cold War Gallery. All of the lesson plans come complete with in-class activities, answer sheets, and a downloadable Lesson Plan Resource Kit for educators. We look forward to exciting opportunities in the 2012-2013 school year, and thank our teachers for their hard work!