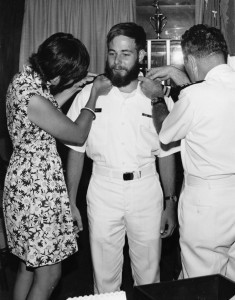 The highlight of the Annual Meeting of the Naval Historical Foundation on 23 June, 2012 was the ribbon-cutting of a new exhibit for the Navy Museum, “Into the Lion’s Den,” covering the nighttime naval battle of Haiphong Harbor on 27 August, 1972. This exhibit had particular resonance for me, since I was serving as the CTF-75 Staff Cryptologist in USS Providence (CLG-6) during this classic surface-ship shore bombardment operation. The best account of the battle can be found in the article “Into the Lion’s Den” by ADM James L. Holloway III, USN (Ret.), which appeared in the August, 2004 issue of Naval History magazine, published by the U.S. Naval Institute. Admiral Holloway, long-time Chairman of the Naval Historical Foundation, was Commander Seventh Fleet and responsible for planning the “Lion’s Den” operation. A second valuable source on this battle is the 1999 online article written by Mr. Chuck Packer, a crew member of the destroyer USS Rowan (DD-782), available at tin-can.org/Battles/DD_782/dd_782.htm. Prior to the ribbon-cutting, ADM Holloway delivered the 2012 Leighton Lecture providing the strategic setting, operational considerations, and tactical evolutions of Operation LION’S DEN, which turned out to be the last surface action of its kind in U.S. naval history.

Permanently assigned to the Naval Communication Station, Philippines, I reported TAD to Commander, Task Force 75 underway in the Gulf of Tonkin approximately two weeks prior to the operation as a newly-minted Lieutenant, so this was my first combat experience, although I had served for two months off Vietnam on the oiler USS Chipola (AO-63) as a MIDN 1/c, servicing destroyers, cruisers and carriers that were involved in direct combat operations. . Rather than delve too deeply into the details of the LION’s DEN operation, I would like to provide some impressions of my experience. 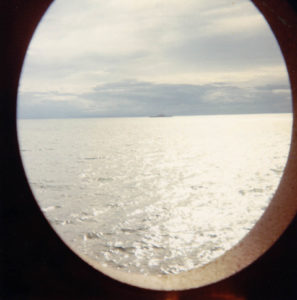 The other ships in the strike included USS Newport News (CA-148), which boasted three, three-gun, rapid-fire 8” turrets; USS Rowan (DD-782), equipped with the Shrike anti-radiation missile; and USS Robison (DDG-12), a ‘double-ender’  that could fire effectively while retiring, something the Providence, with a Talos missile mount aft, could not do. Providence stood well off the coast during its relatively slow approach to Haiphong to rendezvous with the other three ships. This ‘casual’ transit was used in an attempt to appear as a merchant ship to NVN coastal surveillance radar. I remember standing topside looking down at the tumblehome of the ship as it moved through the dark, warm, calm waters of the South China Sea and thinking how impressive the sight was as we proceeded north. Once in formation and with the “Execute” order, we increased speed to 27 knots, heeled sharply onto the firing leg, and began firing with our 6″ and 5″ batteries. At my GQ station in the ship’s Supplementary Radio space on the 0-1 level, we could feel the concussion of the Providence’s guns against the hull. After the firing run (which seemed to last longer than it actually did), we went to “All Ahead Flank” ringing for 30 knots and headed south to the open waters. It was during our retirement leg that we were informed by CIC that the force was under attack by NVN torpedo boats. It is this attack that the new “Into the Lion’s Den” exhibit so vividly portrays. The viewer can stand (or sit) behind the conning officer on a replica of the bridge of the Newport News, immersed in the rapid flow of information being received and orders being passed, and surrounded by realistic sounds and feel of actual major-caliber naval gunfire.  I have no doubt this will be one of the most-viewed exhibits in the museum, and deservedly so, both for the story it tells and how compellingly it tells it.

While naval power was widely applied in a variety of ways during the Vietnam War, typically it is offensive air operations from carriers on Yankee Station or riverine warfare by Swift Boats that most people think of. The use of surface ships to provide naval gunfire support to U.S. and ARVN operations, most notably on the “gun line” near the DMZ, is a lesser-known, but important part of the overall naval effort. By extension, naval strikes north of the DMZ as part of Operation LINEBACKER in 1972 are perhaps not as well-understood as the air assaults flying from carriers in the Gulf of Tonkin. While I was embarked, Providence took part in numerous one- or two-ship nighttime strikes north of the 17th parallel, including against the all-but-indestructible Thanh Hoa bridge, but Operation LION’S DEN was the largest of these. Even at the time, we knew it was significant: a multiple-cruiser attack against a fortified enemy homeland—very much like a WW II or Korean War operation, and very possibly the last such all-gun operation of its kind, as it indeed it proved to be. It was definitely a very exciting half-hour or so! As ADM Holloway noted in his remarks, it did do some damage, it did send a message, and it most certainly demonstrated the mobility and flexibility of seapower.

One of my most vivid impressions is the youth of virtually everyone involved: I was only 24-years old and the men in my division, except for my CPO and LPO, younger than that. As I recall, the Providence‘s OOD was a LT(jg) and the helmsman was at most a PO3.  They surely knew how to handle that ship when it counted. While I’m sure every one was a bit apprehensive (maybe a lot apprehensive), all my sailors stayed calm and did their jobs as if it was just another routine watch. I recall that we had three very well-used cassette tapes (!) by Carole King, Cat Stevens, and Bob Dylan in our space. Incongruous as it might seem, when the Providence made its attack, Bob Dylan was singing as the ship’s guns hammered away in counterpoint!

As noted, we retired at flank speed (one of only three times I ever went 30 knots on a ship) and even though we eventually slowed, we still maintained an ‘excess SOA’ of 20 knots for several hours to get us clear of China’s Hainan Island as quickly as possible. From Haiphong Harbor, Providence headed straight to Hong Kong for a well-deserved, scheduled port visit. News of the operation was not announced by the U.S. until we were anchored in Hong Kong, given the sensitivities of the time with respect to relations between the U.S. and the People’s Republic of China, which was supplying North Vietnam. My wife had flown to Hong Kong from the Philippines, so this liberty call was doubly memorable and enjoyable.

I would like to thank the members of the Naval Historical Foundation, the Navy Museum and in particular ADM Holloway for the vision and effort that went into creating this display which so impressively chronicles the story of Operation LION’S DEN: the Battle of Haiphong Harbor. 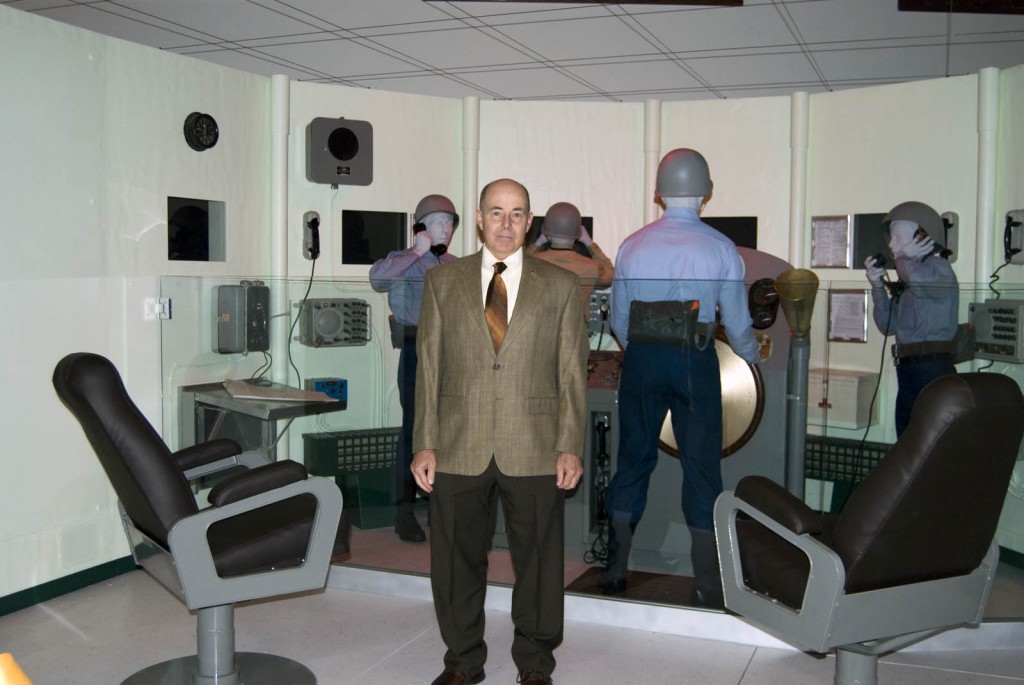