Story and photos courtesy of the Naval History and Heritage Command

WASHINGTON (NNS) — The National Navy Museum (NNM) received cable-controlled undersea recovery vehicle (CURV) III, the Navy’s most sophisticated deep sea recovery submersible until its retirement in 2007, along with its operator control van, July 2. The submersible and van were installed in the Museum’s new Cold War Gallery, located in Building 70 at the Washington Navy Yard.

The display will include multiple real-time and vintage video camera feeds from Navy research and recovery submersibles, including historic feeds from CURV-III.

CURV-III, which was capable of diving to depths of more than 20,000 feet, was ultimately made obsolete with the introduction of the Navy’s state-of-the-art CURV-21.

“The CURV III represents a milestone in Navy history. For more than 20 years, it was the workhorse of deep diving operations and was a reminder of our American ingenuity and technological capabilities,” said Navy Capt. Jerry Hendrix, interim director of the Naval History and Heritage Command, which supports NNM. “This vehicle is masterpiece of naval research and design, and will be a wonderful addition to our Cold War Gallery.”

When it was initially deployed, Soviet planners were shocked to discover CURV-III’s abilities to retrieve lost Navy assets from such depths, especially when many of the “recovered” assets were theirs.

“This is a remarkably important Cold War story, one that needs to be told,” said Jim Bruns, director of the NNM, a sentiment that was echoed by John Sasse, supervisor of deep ocean search and recovery for the Navy.

“CURV-III’s colorful history makes it more desirable to donate it for display than any of the other alternatives available to the Navy,”said Sasse.

CURV-III participated in the rescue of two crew members trapped in PISCES-III in 1973 off Ireland at a depth of 1,575 feet. In 1990 the submersible dove to 20,106 feet off of Puerto Rico, making it the first Navy recovery vehicle to go deeper than 6,000 meters CURV-III recovered a CH-47 helicopter off of Wake Island in 1992 from a depth of 17,251 feet, the world’s record for deepest salvage at the time.

Over the years, CURV-III has participated in the recovery of countless black boxes and conducted many secret missions, recovering an array of important “lost” Cold War objects. The last assignment was the recovery of a downed royal Australian navy H-60 Blackhawk helicopter from 9,000 feet of water off the coast of Fiji in 2007.

CURV-III and its control consoles will become the cornerstones of the Cold War Gallery’s new STEM Center, an interactive learning activity center devoted to science, technology, engineering and mathematics education. The Cold War Gallery was created with support from the Naval Historical Foundation, which will operate the new Cold War STEM Center. 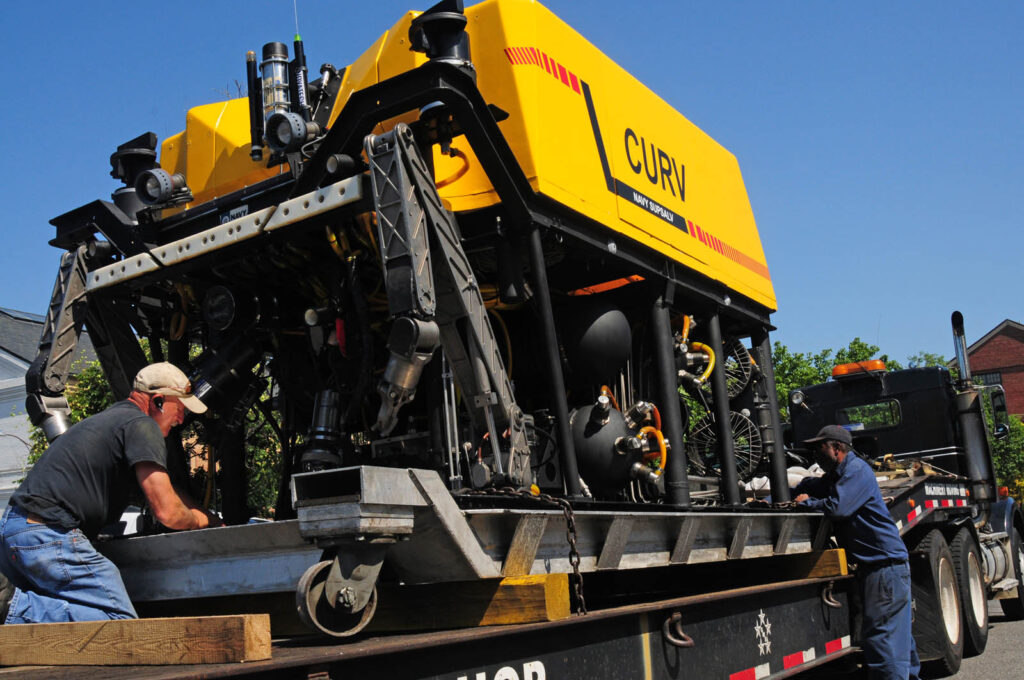 Workers from Machinery Moving get the Cable-controlled Undersea Research Vehicle (CURV) III ready for offloading as they deliver the vehicle to Navy History and Heritage Command, July 2. The vehicle has a 20,000-foot depth rating and was used untiil 2007 to do many deep sea tasks from simple exploration to rescuing astronauts and hydrogen bombs from military salvage. U.S. Navy Photo 120702-N-CS953-001 by Mass Communications Specialist 1st Class (AW) Tim Comerford.