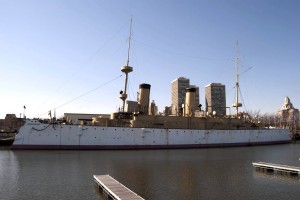 Cruiser ex-USS OLYMPIA in a 2010 photo

Speaking on the deck of the decommissioned Olympia in Philadelphia on 3 May 1931, Naval Historical Foundation President Rear Admiral William Rodgers told thirty veterans of the Battle of Manila Bay and some ten thousand onlookers that “everything possible will be done to preserve Olympia as a historic shrine in Washington along with the Constitution and Admiral Farragut’s Hartford.” [1. Benjamin Franklin Cooling, USS Olympia: Herald of Empire, Naval Institute Press, Annapolis, MD, (2000), p. 218.]

Founded in 1926, the Naval Historical Foundation included Franklin D. Roosevelt among its charter members. Once elected president, he would strive to make Rodgers’ vision become reality.

A week before his election, members of the Naval Historical Foundation were briefed at the Navy Department Building that the National Capital Planning Commission, led by FDR’s uncle, Frederic Delano, favored a building a museum riverfront site where historic ships could be berthed.  Ships suggested were Constellation, Constitution, Hartford, and Olympia.  The members were also told that the prospect of government funding was remote given the economic crisis. [2. “Minutes of the Naval Historical Foundation,” February 1932 Naval Institute Proceedings.]

Despite Roosevelt’s avid interest, once elected president he needed to battle a banking crisis, high unemployment, and other problems brought on by the Great Depression. Still in the aftermath of his inauguration, he did not hesitate to summon Captain Dudley Knox to the White House to discuss issues involving naval history.  One of the projects the two men worked closely on was to publish papers relating to the Quasi-War with France.

Although the Naval Historical Foundation did not abandon its desire for a national museum, other opportunities diluted its focus.  In 1936, Mrs. Truxtun Beale noted that her financial situation would force her to place her house that was built by Stephen Decatur on the commercial market.  Thus began a long series of negotiations with the Naval Historical Foundation aimed at preserving the historic home.

On 17 October 1938, now Vice Admiral Rodgers wrote President Roosevelt’s secretary asking for an appointment to meet the president to discuss the naval museum and the berthing of historic ships.  Rodgers was subsequently invited to come to the White House early in 1939. [3. 21 December 1938, McIntyre Letter to Rodgers, PPF 4513, FDR Library.]

In November 1939, the Foundation endorsed building a naval museum in Washington and mooring historic ships nearby.  Copies of the resolution were sent to the president and house and senate naval affairs committees. In his letter to the president Vice Admiral Rodgers reminded FDR:

“Our members are aware that the project is largely one of your own conception and they all the more hopeful of your continued interest in it, more especially since the United States among all the great maritime powers is alone in having no national naval museum with which to illustrate for the general public the national value of seapower.”

World War II changed the focus of Congress, and appropriations for a new museum and historic ship berthing plan would not be forthcoming.  But the president remained committed to the concept.  With the momentum of the war having shifted to the allies, new Naval Historical Foundation President Admiral Joseph Strauss sent a letter dated 26 June 1944 to the commander-in-chief stating that a by-product of the “titanic war that rages” will be artifacts and that the Navy will need a place to display them…or else they may share the recent fate of prize guns off HMS Macedonian which were melted for copper. [4. NHF 1944/1945 Museum Correspondence Folder.]

So the Navy was offered land along the Potomac River west of the Hospital (today’s Kennedy Center!) with the initial thought of berthing historic ships on the quay. However, given tidal conditions, the Navy drafted plans for another wet basin somewhat smaller than the famed Tidal Basin.  As for the hospital, it was realized the land was inadequate for an on site replacement. Instead the Navy built a new hospital in Bethesda. The National Park and Planning Commission proposed saving the Old Observatory and ripping down the rest for an overlook park. [5. Ibid.]

As American Naval Forces advanced in the Pacific and the Army broke out and liberated vast areas of northern France, the pace picked up on moving forward with the museum. On 25 July 1944,  Rear Admiral Wilson Brown sent a letter  to Chief Bureau of Yards and Docks Vice Admiral  Ben Moreell attaching the president’s sketches of museum and basin that would host, Olympia, Constellation, Hartford, and a World War I flushdeck destroyer.

At the Naval Historical Foundation’s annual meeting on 24 November 1944, the members were told that Admiral Wilson Brown had briefed the president on the naval museum and Roosevelt directed the Bureau of Yards and Docks to proceed.

In a memorandum titled  “General Plan for a United States National Naval Museum” retired Captain Dudley Knox  proposed selecting an Annapolis graduate to run the museum and have the Chiefs of Bureaus of the Navy Department serve as Trustees.  To which Roosevelt observed in note to his naval aide: “Navy people are notorious for not knowing what appeals to civilians.” The note concluded: “Dudley Knox had better come to see me as I have worked on this matter personally for the last ten years.”[6. 23 February Roosevelt  memorandum for Admiral Wilson Brown, OF 18-II  FDR Library.]

Apparently, Knox did a redraft of his proposals on 5 March 1945. Five days later, Admiral Brown wrote him to say the president read it with interest and that the president would meet with him and two assistants in about two weeks.  The meeting would not occur. [7. 10 March 1945 Brown memorandum  to Knox, OF-AA FDR Library.]

Anticipating that the vision for the naval museum and historic ships basin would move forward, the Navy dry docked the Olympia in April 1945 for hull cleaning/repair and other conservation work.

On 12 April 1945, President Roosevelt passed away.  A vision died with him.

For Olympia, the April 1945 overhaul represented the last time she was taken out of the water for hull repair and conservation.  Currently at Penns Landing along the Delaware River in Philadelphia, the ship has serious hull corrosion issues – especially along the waterline.  To set up a mechanism to provide funding for a badly needed overhaul, the National Trust for Historic Preservation has set up a fund and welcomes contributions.  Please visit www.preservationnation.org/olympia to learn more.

Sketch of a proposed naval museum, circa 1930’s, by William Partridge. From the collection of the Naval Historical Foundation.