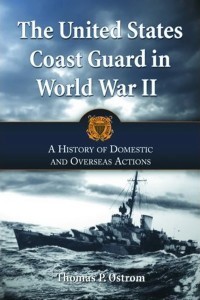 This is a well-written and nicely researched account of the U.S. Coast Guard during World War II. The author, using seventeen topical chapters, provides short, concise accounts of various missions carried out by the Coast Guard during the war. Each of these chapters is a standalone article highly suitable for publication in Naval History.

In setting the tone for the book, the author examines Coast Guard activities in the months before the United States’ official entry into the war, discusses the pre and wartime administrative organization of the Coast Guard, and looks at the wartime leadership of the Commandant of the Coast Guard, Admiral Russell R. Waesche. Coast Guard war time missions covered in the book include domestic port security, the Greenland Patrol, guarding the Aleutians and Bering Sea, participating in convoy service as both gunners on merchant ships and as part of the naval escort, performing various functions in support of amphibious assault landings in the Mediterranean and the Pacific areas including action during the Normandy Landings, providing crews to man U. S. Navy ships, maintaining navigation on the Great Lakes, undertaking a variety of aircraft support and patrol missions, development of LORAN and the helicopter, and performing day to day rescue missions.  During World War II, the Coast Guard served in every theater of operation and lost 1,030 of its members during the war.

One fact that becomes clear in reading this book is that during the war years, the Coast Guard had to not only participate actively in the defeat of the enemy but continue to perform its normal job of maintaining navigational aids, conducting ship safety inspections, and carrying out search and rescue missions. The book ends with excerpts from two letters written home by a Coast Guardsman during the war, an investigation into the loss of LCI (L) 91 due to enemy action and a letter of condolence written by a commanding officer to the parents of a dead Coast Guardsman.

Much of the story presented within this book is told through the author’s focusing his discussion on what was experienced by a variety of individuals and ships. The reader is thus presented with a kaleidoscope of small events that illuminate the greater event under discussion. The text is supported by a nice array of maps and photographs. This book thus supplements, and does not replace, those two standard authoritative works on the World War II Coast Guard, Guardians of the Sea and The Coast Guard in World War II. The book under review is designed to provide the casual reader with a wealth of details about the Coast Guard during World War II. However, since the book is organized by subject matter and not chronologically, each chapter to some extent recapitulates a topic discussed in another chapter. Those seeking more information on the Coast Guard will find a nice bibliography at the rear of the book. The book should appeal to anyone interested in the Coast Guard or warfare at sea.

Charles Bogart of Frankfort Kentucky is a frequent contributor to Naval History Book Review, and was a 2011 Naval Historical Foundation Volunteer of the Year.