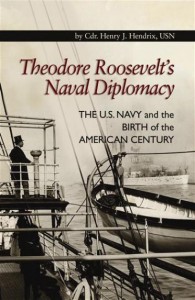 Captain Henry J. Hendrix, USN brings an impressive background of naval professionalism and scholarly credentials to the task of writing this history of President Theodore Roosevelt (TR) and the 14-month global cruise of the Great White Fleet of U.S. battleships named after U.S. states, and assorted auxiliary vessels in 1907-1909.

The author, a 20-year veteran at the time of his book’s publication, performed six overseas deployments, studied at the Naval Postgraduate School, and earned a Ph.D. from King’s College in Britain. Captain Hendrix is the recipient of several literary awards, has written a number of articles for prestigious journals, has served as a policy adviser in the Defense Department, and is currently the Director of the Naval History and Heritage Command (read our earlier interview with Captain Hendrix).

Hendrix traced TR’s formative background from sickly child to rancher, boxer, New York City police commissioner, state legislator, governor, Republican progressive reformer, distinguished historian and author, Assistant Secretary of the Navy, and role as a U.S. Army officer in Cuban combat in the Spanish-American War (1898), from and after which the U.S. acquired colonial possessions that included the Philippines, Puerto Rico, Guam, and the Guantanamo naval base in Cuba.

The U.S. president (1901-1909) made a post-presidential Third (Progressive/ Bull Moose) Party run during which he survived an assassination attempt. TR was a hunter, explorer, conservationist, and builder of the Panama Canal.

Hendrix explained TR’s expressed need to control the Western Hemisphere via the Monroe Doctrine and his interpretation of it, and commitment to a strong U.S. Navy to deter Japan by exhibiting U.S. geostrategic power, naval bases, and coaling stations. Hence the motive behind TR’s ordering the Great White Fleet of the U.S. Navy to circumnavigate the globe and visit foreign ports.

President Roosevelt was sensitive to Japanese pride and interests, and the discrimination Japanese suffered in America. Yet he was also conscious of Japanese Pacific objectives, and wanted the Great White Fleet to send a message.

Hendrix gives kudos to TR for negotiating the Treaty of Portsmouth (at the New Hampshire naval base) between tsarist Russia and Japan after the Russo-Japanese War (1904-1905). Roosevelt ironically received the Nobel Peace Prize for his diplomatic achievements, and the animosity of a victorious Japan whose officials concluded TR’s “peace” deprived them of more extensive territorial spoils.

After the successful White Fleet voyage, the former U.S. Navy secretary decreed that the white navy warships (that were cooler in tropical temperatures) be painted a more concealing gray. The U.S. Coast Guard (then the Revenue Cutter Service) kept its vessels white, until World War II, Vietnam, and Persian Gulf combat convinced that sea service to go navy camouflage in wartime.

The Great White Fleet was accorded hospitality at a plethora of ports in the U.S., Latin America, Asia (including Japan), the Mediterranean, and Atlantic Europe. The power and technology of the well-armed, steam-powered, coal-burning fleet convinced the Japanese, as did Adm. Matthew Perry’s 1850’s visits to Nippon, that it must expand its naval assets to counter European and American Asiatic imperialism.

Fourteen thousand sailors and U.S. Marines constituted the crew complement. The U.S. Marines were a backup force,Hendrix revealed, in case TR’s intervention in Panama (to build the Panama Canal across the isthmus) caused Columbian military action.

The author used his naval expertise to compare and contrast the coercive, humanitarian, and nation-building paradigms of TR’s 20th century U.S. Navy, and the requirements and missions of today’s Navy with missiles, aircraft carriers, submarines, and advanced technology in the age of international terrorism.

Captain Hendrix has written a magnificent U.S. naval history that includes a detailed bibliography, photographs, notes, and index. But, given the complex geopolitical and diplomatic elements explained in this compelling history, the reader would benefit from the inclusion of maps to illustrate the historical geography of the voyage.

Thomas P. Ostrom is the author of three books on U.S. Coast Guard history, including “The United States Coast Guard and National Defense: A History from World War I to the Present.”