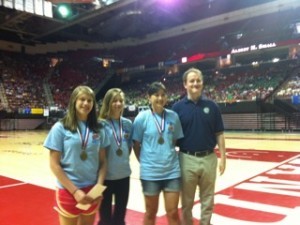 In an energetic National History Day ceremony at the University of Maryland’s Comcast Center in mid-June, three middle school students from Alaska were awarded the Naval Historical Foundation’s Captain Kenneth Coskey Award for Naval History scholarship. The 2012 NHD theme was “Revolution, Reaction, Reform in History”, and the three young girls, Hallie Whitmore, Challis Debenham and Mia Keyser of Romig Middle School, Anchorage, developed a 10 minute documentary entitled “The Trials of Truth: The Amistad Revolution.” The award was presented by NHF Digital Historian Dave Colamaria, and included National History Day medals for all three students, as well as a $500 award sponsored by the Foundation.

The girls developed a documentary about the 1839 revolt by Africans being transported as slaves on board the schooner La Amistad. While at sea, the Africans took possession of the ship, which was soon after taken into custody by the U.S. Brig Washington. The Africans were arrested, and a very public court trial ensued, with the case eventually rising to the Supreme Court. As the international slave trade had been previously outlawed, the Africans were freed and sent home. They returned to Africa in 1842. The trial was significant, as it impacted public opinion on slavery in the United States.

Hallie, Challis, and Mia have competed in National History Day for the past three years. They had previously won Best in State award, but their Amistad documentary was selected for the National finals. Research for this project began with internet searches, but soon took the girls into an in-depth investigation. They uncovered materials at their local library, and watched documentaries on the topic. They also made use of online materials from the National Archives. The girls interviewed two college professors and used footage of the interviews in their documentary. Professor Howard Jones from the University of Alabama was a historical consultant for Steven Speilberg’s 1997 movie Amistad. He is the author of Mutiny on the Amistad, a book that proved quite influential to the girls. Professor Forest Nabors from the University of Alaska specializes in civil rights, and provided information that was used in the final film. The end result was a ten minute documentary that  was entered in National History Day’s Junior Division.

All three of the girls found the experience both educational and influential. In addition to their in-depth historical research, they had to learn new technologies for making documentaries. According to Challis, she “learned how to use modern day technology, I learned a lot about my countries history and I learned how to work well with other people.” She also learned “how to make a good, efficient, and interesting documentary. I love, love, love making movies and creating this documentary has really helped me develop my film making skills.” Hallie found that “National HIstory Day gave me the chance to explore history in a way that was super fun! When we researched our project it was like uncovering the truth behind a mystery, we kept rewriting our script as we got more and more answers as well as finding out what happened exactly and why.”

The NHF National History Day prize is named for retired Navy Captain Ken Coskey, a Vietnam War combat aviator and Prisoner of War, and former Executive Director of the Naval Historical Foundation from 1987-1999. Judging of the award is conducted by the organizers of National History day. Please visit our Prizes and Awards page to see a list of the previous recipients of the annual award, dating back to 1999.

We thank the girls for their hard work and congratulate them on their award, and agree wholeheartedly with Mia that “the National History Day Competition is both fun and educational; it puts the fun back into history!”