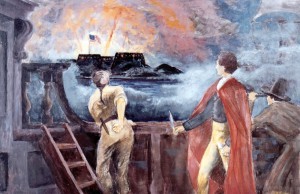 “In Full Glory Reflected: Maryland During the War of 1812”

During this anniversary year, two centuries removed from the War of 1812, America’s “Second War of Independence,” the Maryland Historical Society (MdHS) is retelling a dramatic story. With five thousand square feet of displays and more than a hundred historic artifacts, the largest bicentennial exhibit in Maryland, In Full Glory Reflected, Maryland During the War of 1812, will be unveiled on June 10th.  For more information on the many MdHS exhibits and programs, 201 W. Monument Street, in Baltimore’s historic Mt. Vernon neighborhood, go to www.mdhs.org or call 410-685-3750.

The exhibition will be featured for the three years of the 1812 Bicentennial. It will be open to the public Wednesday through Saturday from 10am to 5 pm and Sundays, 12-5. In Full Glory Reflected was made possible by generous support from the Middendorf, Harley Howell and Helen Clay Frick Foundations as well as the Maryland Heritage Area Authority.

Visitors will have the privilege of seeing many treasures donated to the MdHS during its 168 year history. One of the earliest printed broadsides of the Star Spangled Banner song, complete with its famous typo, will be on view. Vivid paintings by Battle of Baltimore veteran Thomas Ruckle and the iconic “Bombardment of Ft. McHenry” by Alfred Jacob Miller will flank the Star Spangled Banner document. The humble “Etting Cup” bears the etched signatures of several of the 1812 “Rock Stars.” The cup was a treasured part of 1812 veterans’ reunions for many decades in the 19th century.

1.The Star Spangled Banner – The Maryland Historical Society’s most iconic object, a national treasure, is the source of the American National Anthem. The manuscript, containing all four stanzas of our national song, was jotted down with few corrections in a Baltimore Tavern the night after Francis Scott Key was released by the British on September 16, 1814.

2. Thomas Boyle Proclamation – Skipper of the Baltimore privateer “Chasseur,” Captain Boyle had the nerve to tack up an 1814 proclamation blockading the entire United Kingdom with one ship and then sailed through a gauntlet of enemy ships escaping capture.

3. Two Cartoons – The War of 1812 era was a rich with political cartoons and each tells an interesting story.

A. The Conspiracy Against Baltimore – A cartoon about party politics for and against the war that led to one of the most vicious Baltimore riots in July, 1812.

4.  Two Thomas Ruckle Paintings – Irish immigrant house painter Ruckle was a corporal at the Battle of North Point with the elite 5th Maryland Regiment. Excited about his role as a defender, Ruckle left behind two large folk art paintings that are treasured for their accuracy. One shows the American militia assembling on Hampstead Hill (now Patterson Park), the other the Battle of North Point.

5.  Etting Cup – Samuel Etting was a member of a Jewish company that was in the Ft. Mc Henry trenches. He and his colleagues, including fort commander Major George Armistead, scratched their names into a 6 inch blackened mug that was brought out at reunions.

6.  A British Bomb – One of the 200 lb. explosive “bombs” that rained on Ft. McHenry for a day and a night, fell at the feet of a fort defender and did not explode. The private kept it as a souvenir.

7.  Commodore Joshua Barney Portrait and red Moroccan sword belt – Revolutionary veteran and naval hero Barney commanded the Chesapeake Flotilla and was a hero at the Battle of Bladensburg. Rembrandt Peale painted him for the City of Baltimore along with the other Maryland heroes.

8. Commodore John Rodgers Silver Service – Rodgers, an important naval hero was best known for his part in the 1814 defense of Baltimore. The Maryland Historical Society has about 10 of the 60 exquisite silver pieces of dinnerware commissioned by Baltimore to honor his service.

9.  The Bombardment of Ft. McHenry – The most accurate portrayal of the September 13-14, 1814, British attack on Ft. McHenry was a large canvas painted by Alfred Jacob Miller to honor his father who helped defend the fort. Miller went on to become one of America’s most famous frontier painters.

10.  A Hundred Year Musket– A 1763 flintlock French musket delivered to the Americans during the Revolution and branded United States, saw service in the War of 1812 with the Maryland militia and then was converted to a percussion lock by Confederates at the beginning of the Civil War.

The Maryland Historical Society was founded in 1844 and is the world’s largest museum and library dedicated to the history of Maryland. Occupying an entire city block in Baltimore’s historic Mount Vernon District, the MdHS mission is “to collect, preserve and interpret the objects and documents that reflect Maryland’s diverse cultural heritage.” Home to the original manuscript of the Star Spangled Banner, the MdHS has been publishing a quarterly, the “Maryland Historical Magazine” for more than a century. More information about MdHS can be found online at www.mdhs.org